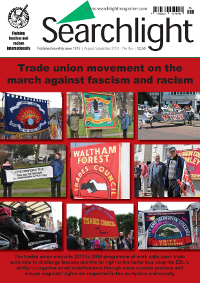 As the author of the Muslim-conspiracy “Eurabia” thesis, Littman has served as a major source of ideological inspiration to the “counterjihad” movement, not least to the Norwegian mass murderer Anders Breivik.

A FEW MONTHS AGO, I analysed some of the ideas underpinning Peder Jensen’s writings, and his impact on Anders Breivik [‘Fjordman and fascism: the extremes of the counter-Jihad worldview’, Searchlight, April 2013]. In this article, I want to build on this and set out some of the ideas of a figure that profoundly influenced him, Bat Ye’or. As ideologues such as Jensen, violent extremists such as Anders Breivik, and movements such as the English Defence League all highlight, Europe’s contemporary far right cultures have become steeped in a radical milieu that has become profoundly anti-Muslim in recent times.

In a nutshell, one of the most successful new narratives of the far right is not to reconfigure neo-Nazism, but to reject it. Instead, many activists now argue that western civilisation is facing an existential threat from an invading Muslim hoard, one that is on the cusp of taking over the continent and imposing its ostensibly barbaric and backward way of life on Judaeo-Christian civilisation. This is being allowed to happen by a corrupt, left wing elite who promote multiculturalism.

Defining the new conspiracy
At the heart of this ‘Counter-Jihad’ discourse is a figure of some intellectual sophistication, the independent ‘historian’ and writer of deeply anti-Muslim monographs on European history and politics, Bat Ye’or. This is a pen name, translating roughly as ‘Daughter of the Nile’, adopted by a Jewish, Egyptian-born, British author, Gisele Littman. Her work includes books such as Eurabia: The Euro- Arab Axis and Islam and Dhimmitude: Where Civilisations Collide.

Many within the Counter-Jihad movement have picked up Ye’or’s conspiracy theory themes. As analysts such as Alexander Meleagrou-Hitchens stress, this fuzzy movement spans websites such as Gates of Vienna, far right street movements like the UK’s English Defence League, and US based activists such as Pamela Geller. It even blurs into quite mainstream voices, such as the Daily Mail columnist Melanie Phillips. For the most part, the highly disparate voices that make up this movement do not actively promote violence. But they do foster a milieu in which, for some, violence towards Muslims and towards left wing figures becomes easier to imagine, and so, again for some, easier to consider as desirable.

The family relationship
Given this spread of figures and organisations, we should be careful not to assert that people within this movement are all the same. Not all voices from within this fuzzy ‘Counter-Jihad’ movement argue the same points, and some are far more extreme than others. Some are bloggers, or self-styled independent voices, decrying the political mainstream for failing to recognise their much-inflated readings of the security threats posed by Muslims. Others are street activists, or even violent extremists. Nor do they all meet together, or have a central coordinated plan, though of course some conferences do occur – such as at Aarhus in 2012.

But despite this being quite a nebulous movement, we can certainly say they all possess some form of ‘family relationship’. To stick with European figures within this movement at least, what tends to unite them is, as they see it, the waning of European national identities as a result of soft, multicultural and left wing politics, which promotes cultural difference over strong national and European traditions, which are identified as Judeo-Christian. This, the Counter-Jihad narrative continues, is seized upon by Muslims inside and outside of Europe, who themselves have an innate desire to conquer and overthrow European culture and society.

The Counter-Jihad movement’s ‘history’ is a future-orientated one too, often presenting scary sketches of the near future that are based on an assortment of migration statistics and projected birth rates of Muslims. The trajectory such voices forecast is one that predicts that Muslims will be running Europe within the next generation or so, having already begun to mount a largely ignored invasion of the continent.

This narrative finds many forms. For example it can be encoded with quite a strong conspiracy theory element, or can develop different readings of just how many Muslims in Europe are involved in such plotting, or what types of activity should be included here. Yet it is always marked by the linking of data and analysis, some more empirical, some more speculative, to some form of repetition this story of Europe on the cusp of Islamisation.

Bat Ye’or’s conspiracy theory
Turning to Bat Ye’or’s approach here, within her overarching conceptual approach we can certainly give her credit for some originality. Her work offers a radical new strain of thinking that helps to style each and every form of Islam as the same, both across the globe, and through time too. A Muslim perpetrator in the Armenian genocide, or a violent thug within a non-democratic regime such as in Sudan, is just the same as a Muslim living down the road.

In particular, she develops a new concept in her work, which she dubs ‘dhimmitude’. Rhetorically, this neologism is quite consciously designed to sound similar to ‘servitude’, and is drawn from simplistic reading of Islamic theology. Drawing on the Arabic term ‘dhimmi’, for Ye’or the term becomes a dubious concept for structuring a far right historiography, and is used to describe the socio-Iegal contexts of Jews and Christians living under Muslim rule.

Via her idea of ‘dhimmitude’, she essentialises, and asserts that relationships between Muslims and non-Muslims always have been, currently are, and always will be, a relationship defined by power. For her, Muslims are driven, through the theology of the faith, to engage in Jihad to establish dominance over Christians and Jews. This is seen as an essential quality within Islam. It is a direct consequence of Jihad, and all those who are deemed ‘Infidel’ will ultimately need to accept a condition of humiliation.

Adding to this theme, she has also developed the concept of ‘Eurabia’, which has become another highly influential buzz term among the anti-Muslim far right. In her analysis, Eurabia refers to a behind-the-scenes conspiracy by leading Arab countries. For her, this developed from the early 1970s and forged clandestine networks of power that promoted pro-Muslim and anti-American values in Europe, and sought to lay the groundwork to establish a longer-term cultural hegemony over European society. For Ye’or, the French lay at the heart of this conspiracy, drawing on De Gaulle’s anti-American legacy and longer-term sympathies with the Arab world.

Then, in 1973, as a result of the oil crisis, an organisation supported by the EEC was created called the Euro-Arab Dialogue. This became the centrepiece of a series of mechanisms for the cowing of all European political structures to follow an agenda set by Muslim nations, especially in the Middle East. Powerful Europeans at the highest level were regularly corrupted, lured by bribes and essentially conned into doing the bidding of Arab nations.

Academic or ideologue?
It is worth bearing in mind that far right activists can develop ideas in a very scholarly-seeming manner. For example, Holocaust denial literature often presents itself as genuinely academic, while really it is simply regurgitating a mythology in lengthy texts with footnotes. Is this the case with Ye’or too?

For the uninitiated, Ye’or’s writings certainly appear to conform to the model of academic texts, albeit of a more polemical kind. Moreover, the backs of her books are adorned with quotes from leading academics as well as fellow anti-Muslim ideologues. For example, according to the high-profile Niall Ferguson:

No writer has done more than Bat Ye’or to draw attention to the menacing character of Islamic extremism. Future historians will one day regard her coinage of the term ‘Eurabia’ as prophetic. Those who wish to live in a free society must be eternally vigilant. Bat Ye’or’s vigilance is unrivalled.

This quote is regularly cited when Ye’or appears on websites such as Jihadwatch, and certainly is used to give her ideas gravitas and respectability. If Ferguson took the time to read her work in depth, he might well be appalled by the ahistorical manner in which a deeply polemical viewpoint is set out. Or he may have done so, agrees with her politics, and so sees nothing wrong with its flawed methodology and dubious arguments.

To Ye’or, the Euro-Arab Dialogue was the deus ex machina by means of which European politicians and civil servants willingly prepared for the subjugation of Europe and whose ‘occult machinery’ has bought about the ‘irreversible transformation’ of Europe into a ‘new geographical entity – Eurabia’ … a name she randomly applies to the conspiratorial project she describes without offering any evidence that the EAD, or any other organisation, ever used it….

As an analysis of contemporary European history, this is flat-out barking gibberish, which falls somewhere between hyper-Zionist propaganda, crude conspiracy theory and delirious fantasy…. Nowhere in this ideologically driven interpretation of European-Arab relations does Ye’or come close to proving the ‘secret history’ that she professes to reveal.

Conclusion
Now, Matt Carr’s analysis is essentially correct, but it does not mean Ye’or has not been influential. Indeed, adding to Carr’s comments, it is important to stress that Ye’or’s historical methodology is highly flawed, and steeped in a strong, deductive approach typical of conspiracy theories and far right readings of the recent past. She starts with unassailable set of conclusions, and then selects facts that fit them – and not always convincingly.

It is likely that she appeals, then, through an ideological resonance around the sense that Muslims are becoming too powerful, and so this theme ‘rings true’ for her supporters, so they go along with it. She began this agenda ahead of 9/11, but only started to be picked up as a relevant voice in the 2000s. Mainstream academia sees her as of little to no relevance, yet she has now become the darling of the Counter-Jihad movement.

Finally, it is important to stress that Bat Ye’or’s far right agenda is not neo-Nazism, far from it. Her ideas are not compatible with a reworking of Hitler’s creed. Indeed, for Ye’or, the Nazis were in collusion with Muslims, and some of her passages even suggest that Muslims were partially culpable for the Holocaust. So here the Nazis are the bad guys. This theme is unsurprising given the fact that Ye’or is herself Jewish. This does not stop the ideology she presents manifesting many of the qualities of a far right perspective, especially the demonisation of hate figures and revelling in conspiracy theory ideas. Its just one that does not like Nazism and antisemitism.