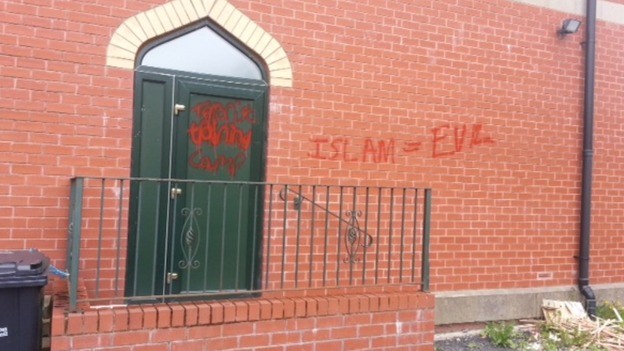 Police have launched an investigation after anti-Islamic graffiti was sprayed on a mosque and a vehicle in Bolton, Greater Manchester.

Police said they were called to reports of slogans reading “Islam = Evil” and “Terrorist inside”. The graffiti has been cleaned off the mosque.

Greater Manchester Police have appealed for information and witnesses and called the act abhorrent. They believe the suspect lives locally.

Supt Steve Nibole said: “Any acts of criminality which are motivated by religious hostility or racism are totally abhorrent and we take action against anyone found to be committing such offences.

“We have launched an investigation and we will do whatever we can to find those responsible and bring them to justice.

“Neighbourhood officers will continue to work very closely with local mosques and partners over the coming days and weeks, both to offer reassurance and advice on taking the appropriate safety measures.”

GMP were forced to deny earlier false reports that hundreds of Muslims were “celebrating” and “cheering” on a street in Oldham following news of the murder.

You’ll note that the graffiti on the door of the mosque reads “Terrorist training camp”.