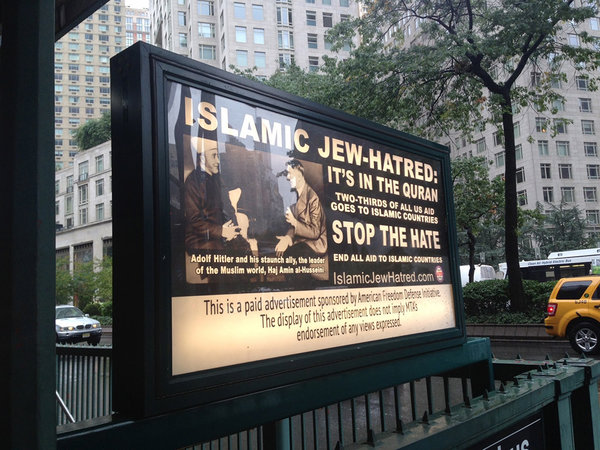 You can’t shout “fire” in a crowded theater. Can an ad proclaim “Jew-Hatred: It’s in the Quran” on a crowded bus?

That’s the free-speech issue before U.S. District Judge Mitchell Goldberg in Philadelphia, who soon will have to decide whether a private group’s ad targeting the Quran and seeking to “end all aid to Islamic countries” can appear on SEPTA’s buses, trains, shelters, and kiosks.

Defenders of the ad say it falls into one of the First Amendment’s most preciously protected categories: public-issue speech.

SEPTA general counsel Gino Benedetti acknowledged the importance of free speech but took a different approach during testimony before the judge Wednesday. Benedetti said he rejected the ad in the fall because of its potential to cause harm and incivility in a transit system that serves and employs Muslims among its one million daily customers and 9,000 employees.

The ad, he said, “puts all Muslims in a single bucket as hating Jews. . . . My common understanding is that not every Muslim hates a Jew. I thought it was portraying Muslims in a harmful, injurious way.”

Produced by the American Freedom Defense Initiative (AFDI), the ad features a photograph of a 1941 meeting between Adolf Hitler and Haj Amin al-Husseini, a Palestinian Arab nationalist who made radio broadcasts supporting the Nazis.

Cofounded in 2010 by conservative commentators Pamela Geller and Richard Spencer, AFDI is a nonprofit incorporated in New Hampshire. Its mission statement says it opposes the “treason [of] government officials, mainstream media, and others in their capitulation to the global jihad and Islamic supremacism.”

In written legal arguments, AFDI said its ad is germane and timely “in light of the fact that many Jews (and Christians) are being persecuted in Islamic countries in the Middle East, and many of these countries receive aid from the United States.”

In May, the ad was submitted in Philadelphia. A month later, SEPTA rejected it, saying it failed to conform to the transit authority’s prohibition on advertising that “disparages” any person or group “on the basis of race, religious belief, age, sex, alienage, national origin, sickness, or disability.”

That prohibition is part of 13 written standards that SEPTA applies to evaluate advertising. In practice, SEPTA officials in Philadelphia closely scrutinize the ads only when Titan, the New York-based outdoor advertising company it uses to solicit and display them, has a question about whether an ad complies with the standards.

In September, AFDI sued, seeking an injunction and saying SEPTA’s rejection amounts to illegal censorship. The transit agencies in New York and Washington have posted the ads “without incident,” AFDI said in its complaint, which “demonstrates that any concerns of disruption by SEPTA are unfounded.”

In its response, SEPTA countered that the ad is not constitutionally protected speech “because it utilizes deliberate or reckless falsehoods in order to demean a group based on its religion, uses intentionally provocative language and images in the hope of eliciting a violent response, and embraces the very hatred of religious groups it purports to condemn.”

AFDI has sought to place the Islamic-Jew-hatred ad – and others like it – on transit system equipment in Houston, Phoenix, Chicago, San Francisco, and other cities.

When New York’s Metropolitan Transit Authority balked and the matter went to court, AFDI prevailed. Similar litigation has occurred in Boston and Seattle.

Some civic leaders and clergy in the Philadelphia region have begun meeting to craft a response. Many said they see “a teachable moment” in the controversy, regardless of what the court decides. Briefs are due at the end of this month, and a ruling could come soon thereafter.

Advocates opposed to the ads began meeting in October.

“I was really heartened,” said Abby Stamelman Hocky, executive director of the Interfaith Center of Greater Philadelphia, a decade-old nonprofit that has been tracking the matter. “People were unified behind the sense that this is not what we are about in Philadelphia.”

Hocky said the Religious Leaders Council, which is staffed by the Interfaith Center and represents more than 30 area churches, synagogues, mosques, and temples, is preparing to launch a social media campaign. It will consist of a rallying statement and a petition on the council’s website for supporters to sign.

“We affirm the constitutional protection of free speech,” the draft statement reads. “That does not diminish our condemnation of irresponsible speech. . . . It is our hope . . . that hate-filled messages will not be carried throughout the neighborhoods [on] trolleys, buses and subways.”

Another possibility, said Interfaith Center board member Sally Baraka, is a comedy-night fund-raiser that would invite stand-up comedians of all faiths to take aim at all types of religious intolerance.

“The ads have a specific tone. I would like for us to not respond in the same tone,” Baraka said. “Humor stops the animosity.”