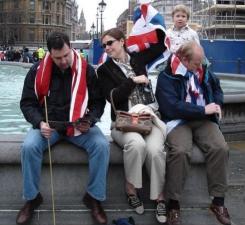 In connection with the so-called March for Free Expression back in 2006 (it was in fact a poorly attended static demonstration in Trafalgar Square, the purpose of which was to defend the “freedom” of the right-wing Danish paper Jyllands-Posten to publish racist anti-Muslim cartoons) Harry’s Place informs us that “huge effort was put by the organisers into ensuring that Nazis did not attend”. Consequently, “when it was attacked by Bob Pitt, it was able to squash his lies”.

It would be interesting to know what this “huge effort” the MFE organisers made to deter the far right consisted of. The BNP made it clear in advance that they supported the MFE and intended to send a contingent from their front organisation, Civil Liberty, to the Trafalgar Square event – but, apart from indicating that they didn’t want the BNP joining them, the MFE organisers appear to have made no serious attempts to counter this. The BNP later reported that 40 of its members had participated in the MFE (out of a total attendance of about 300), and having witnessed the protest I can confirm that the fascists were allowed to distribute their literature unhindered in any way by the MFE organisers.

Some MFE supporters saw the presence of the BNP as a welcome sign of the political breadth of the protest. Johann Hari noted approvingly that “communists mingled awkwardly with fascists” in Trafalgar Square. Another MFE supporter wrote to Tribune rejecting the National Assembly Against Racism’s criticism of fascist involvement in the demonstration: “Everyone was welcome to the rally regardless of their political or other allegiance. That is exactly how it should be…. Free speech cannot be abandoned on the basis of demagogic ‘anti-racist’ demands from self-appointed groups.”

However, other MFE supporters adopted the position of denying that the BNP were there at all. Peter Tatchell, who is of course regarded as a bit of a hero over at Harry’s Place, assured Comment is Free readers: “Contrary to the lies and scaremongering of the far left, there was no BNP presence at Saturday’s rally.” Tatchell’s sidekick, Harry’s Place blogger Brett Lock, took the same line. “Fascists don’t believe in freedom of expression,” he wrote, “and thus were explicitly banned from the march.”

If Harry’s Place want to denounce people for telling lies about the March for Free Expression, they would be advised to look a little closer to home.