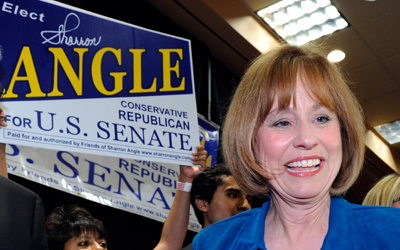 U.S. Senate candidate Sharron Angle told a crowd of supporters that the country needs to address a “militant terrorist situation” that has allowed Islamic religious law to take hold in some American cities.

Her comments came at a rally of tea party supporters in the Nevada resort town of Mesquite last week after the candidate was asked about Muslims angling to take over the country, and marked the latest of several controversial remarks by the Nevada Republican.

In a recording of the rally provided to The Associated Press by the Mesquite Local News, a man is heard asking Angle : “I keep hearing about Muslims wanting to take over the United States … on a TV program just last night, I saw that they are taking over a city in Michigan and the residents of the city, they want them out. They want them out. So, I want to hear your thoughts about that.”

Angle responds that “we’re talking about a militant terrorist situation, which I believe it isn’t a widespread thing, but it is enough that we need to address, and we have been addressing it.”

“My thoughts are these, first of all, Dearborn, Michigan, and Frankford, Texas are on American soil, and under constitutional law. Not Sharia law. And I don’t know how that happened in the United States,” she said. “It seems to me there is something fundamentally wrong with allowing a foreign system of law to even take hold in any municipality or government situation in our United States.”

Dearborn, Mich., has a thriving Muslim community. It was not immediately clear why Angle singled out Frankford, Texas, a former town that was annexed into Dallas around 1975.

Dearborn Mayor Jack O’Reilly called Angle’s comments “shameful.” He said tea party groups inaccurately spread the word that his Detroit suburb was ruled by Islamic law after members of an anti-Islam group were arrested at an Arab cultural festival in June because a Christian volunteer complained of harassment.

Angle is in a dead-heat race against Senate Majority Leader Harry Reid. A recent poll showed Reid and Angle tied in the high-profile campaign.

Reid’s campaign said Angle’s comments advances its ongoing campaign to portray her as outside mainstream America. “The fact that Sharron Angle believes American cities have been taken over by militant terrorist organizations that are ruling our citizens under Sharia law shows a terrifying lack of connection with reality and a willingness to subscribe to conspiracy theories that demonstrates she’s far too extreme and dangerous to represent Nevada in the U.S. Senate,” spokesman Kelly Steele said.