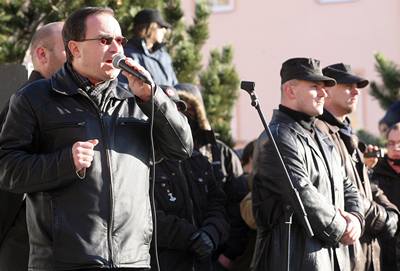 Tomas Vandas, chairman of the Czech Workers’ Party of Social Justice (DSSS), the most famous representative of the Czech far right, is learning from Dutch populist Geert Wilders, but without success as yet, daily Hospodarske noviny (HN) writes yesterday.

Just as Wilders, Vandas wants to drive immigrants and Muslims away from the country and just as Wilders he has been put on trial for his hateful statements. “In our country it is not yet so pressing like in the Netherlands, but the time may come in a few years. They (Muslims) will start to build mosques here and pull down Christian churches,” HN quotes Vandas as saying. He said it is time to warn against Muslims. “Yes, our party will soon focus on this, too,” HNquotes Vandas as saying.

Vandas and other members of the recently outlawed Workers’ Party (DS) of which Vandas was also chairman, were some time ago given suspended sentences, but they have appealed. They were sentenced for the statements they made at the May Day demonstration in Brno last year.

“Mar Vandas said: Our beautiful Czech country has been flooded with a destructive immigrant tsunami wave that destroys everything that is dear to us and that is beautiful,” Brno state attorney Jan Lata quoted Vandas as saying, HN writes.

Lata said not only statements but also the whole context of the demonstration played an important role in the indictment. “Supporters of the party were waving during the demonstration red-white-black flags that refer to the colours of Hitler’s empire. Besides, one German-speaking demonstrator said Hitler was the biggest European in history,” Lata said.

Vandas and the DSSS members were charged with referring to neo-Nazism in their speeches and spreading hatred towards certain groups of inhabitants, for which they face up to five years in prison.