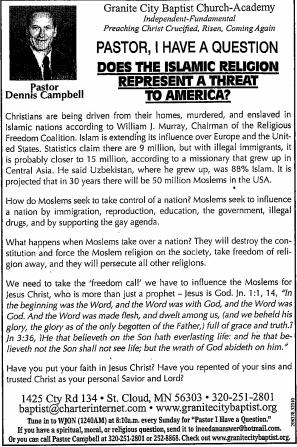 Granite City Baptist Church raised some eyebrows this weekend when it bought an ad (pdf) in the St. Cloud Times that questioned whether Muslims are a “threat” to America.

“How do Moslems seek to take control of a nation?” the ad, which features a photo of Pastor Dennis Campbell, asks. “Moslems seek to influence a nation by immigration, reproduction, education, the government, illegal drugs and by supporting the gay agenda.”

The ad is part of a string of incidents in St. Cloud that troubles human rights advocates. Within the last year, pornographic posters depicting the Muslim prophet Muhammed were put up on St. Cloud telephone polls, and Muslim students in St. Cloud area high schools have reported religious harassment.

Last week, MPR reported on several racist Facebook groups that were created by St. Cloud high school students. “I hate the Somalians at Tech High,” was one such group. Kyle Adams, a former student at St. Cloud Technical High School (he was kicked out for repeatedly using racial slurs) told MPR, “I was raised in believing that this country was founded upon a white Christian nation and the belief of racial separation.”

The Granite City Baptist Church ad seems to mirror some of that anti-Muslim sentiment. “What happens when Moslems take over a nation?” asks Campbell in the ad. “They will destroy the constitution and force the Moslem religion on the society, take freedom of religion away, and they will persecute all other religions.”