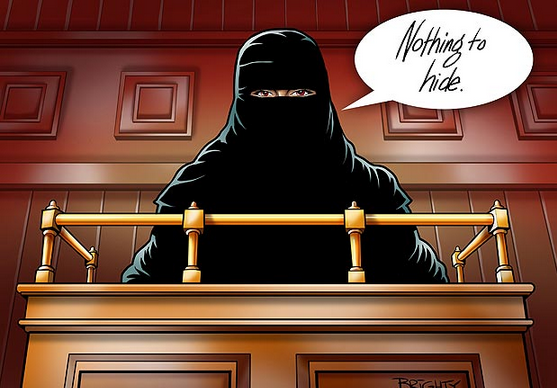 Today’s Sun features a characteristic rant by Trevor Kavanagh on the topical subject of the Muslim veil. Those familiar with his style will know what to expect. Informed analysis, nuanced argument? Forget it. The ignorant bigotry of a bar-room bore – that’s more Trev’s sort of thing.

There is I suppose some entertainment value in the spectacle of a man who is so incapable of self-reflection that he loudly denounces women being treated as objects and male property … five pages on from a photo of a semi-naked woman pouting at the camera.

Veil is everything feminists hate … so why the silence?

A LONDON judge will decide today whether a Muslim woman can cover her face with the veil while standing in the dock on, interestingly, intimidation charges. In the unlikely event that the judge says Yes, the ruling should be immediately referred to the Lord Chief Justice for review.

It is astonishing in the second decade of the 21st Century that the application is even being given the time of day.

The niqab, which covers all but the eyes, is a deliberate act of concealment. And as such, it is a fundamental contradiction to the principle of open justice.

It has nothing to do with the teachings of the Koran and is a piece of “add-on” religious kit imposed by men to keep women in their place. It is designed to separate and exclude one half of a minority group who have presumably chosen to live in Britain for its freedom and liberty.

Yet in these enlightened days, our courts and our colleges of education are being dragged back to the dark ages of superstition and repression.

The judge has yet to announce his conclusions on the 22-year-old woman’s veil, but Birmingham Metropolitan College has already caved in to intolerant fanatics. The college has reversed its own ruling that ALL students must for legitimate security reasons show their faces while on campus.

Its shameful surrender came in the face of a small but vocal protest which was led by rent-a-mob bullies demanding their so-called “human rights”.

Many devout Muslims are appalled by the U-turn. Sensible Muslims will see the ruling for what it is – a defeat for assimilation and goodwill which might well rebound on a community already seen as exotic and separate.

Some women will wear the veil voluntarily or as a fashion accessory. Others have adopted it as a political statement. But they should think of the millions of Muslim sisters who have no such choice.

The niqab – and the burka which obscures even the eyes – are first and last an overt testimony to male oppression. They imply women are property. Objects with no public identity outside the household, controlled at all points in their daily lives by fathers, husbands or brothers. In most cases in Afghanistan, Pakistan and the Arab world, veils are worn not voluntarily but under pressure.

In many countries the veil symbolises a culture that bars women from activities such as driving or schooling in case it encourages illicit sex. It is the same process that ends up inflicting outrages like forced marriage, genital mutilation and “honour” punishment.

This is a culture parading as a religion in which women are second-class citizens who can be divorced with three phrases and who are held responsible if raped unless they can provide witnesses.

It is extraordinary in this age of mandatory equality that while angry men can overturn a reasonable college rule, not a whimper of protest is heard from usually strident feminists. Where is Harriet Harman, high priestess of equality, in this debate? Why has Liberty’s Shami Chakrabarti endorsed the veil? By its very nature, the niqab is in breach of everything Liberty should stand for.

This mask is as barbaric as the chastity belt. An open face is the essential tool for recognition and communication in a neighbourly society. The veil is as sinister as a balaclava or mirror-lensed sunglasses. It says: “Keep Out!”

But as the Birmingham college rightly insisted when it first banned the veil, it is also a security risk. We know this because grown men used it recently to carry out a jewellery heist. Another fugitive attempted to get through Heathrow airport’s border guard by masquerading as a very tall woman.

A new exhibition of Australian art is being marketed in London along with a graphic painting of highwayman Ned Kelly in his famous burka-like iron mask. At least he was dodging real bullets.