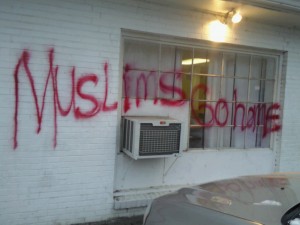 Vandals spray-painted insults on a mosque overnight and left a hate-filled letter to Nashville’s Muslims.

“Muslims Go Home” and a Crusade-style cross were scrawled across the front of Al-Farooq Islamic Center on Nolensville Road, says Salaad Nur, a spokesman. He says the mosque, which primarily serves members of the Somali community, has contacted the police and the FBI.

“They also left a letter at the youth center that says Muslims are friends of Satan and we are here to destroy the United States and to destroy Israel and things of that nature,” he says. “We’re a little bit shaken up. I hope this is just a scare and things don’t get any worse than this.”