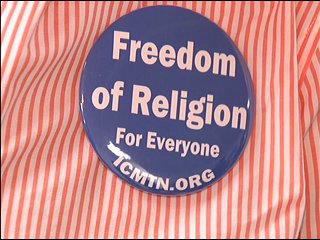 A Murfreesboro mosque opened its doors to the community in the hopes of opening minds about a new 52,000 square foot worship center in the works.

Muslims, Baptists, Catholics, Jews, Agnostics and others checked their religious difference along with their shoes at the door of the Islamic Center of Murfreesboro.

“We feel like the reason for opposition is because maybe they are misinformed; or its something they don’t know about,” Mosque spokeswoman Camie Ayash said. “So what we decided to do was open the doors and allow them to come in and get to know us.”

Around 100 people mingled and ate traditional Muslim foods inside the current worship center on Middle Tennessee Boulevard.  250 families currently worship at the center.

Liz Sodergren wore a blue pin Mosque members gave out to visitors. It said Freedom of Religion for Everyone. “I really love this button because it really summarizes what I believe as an American is important,” she said.