Anti-mosque marchers proudly paraded their opposition for a mile along East Main Street to the Public Square on Murfreesboro Wednesday. They carried flags of America and Israel, sang, “God Bless America,” and carried many signs, including: “Mosque leaders support killing converts. Tell it!”

While the crowd from both protesters and counter protesters appeared to number 500 to 600 at its peak, protest march organizer Kevin Fisher estimated that several hundred marched in his group alone from Central Magnet School to the County Courthouse.

There, they encountered hundreds more of counter protesters carrying signs with messages such as, “All you need is love” and “Freedom for all religion” and “Tolerance.”

“Ignore their hate,” Fisher told his participants as they turned the east corner of the Square on their way to the west side of the County Courthouse.

The marchers included other people seeking public office, such as congressional candidates George Erdel, who calls himself “a tea party Democrat”, and Lou Ann Zelenik, a Republican. Many Zelenik supporters proudly displayed signs and T-shirts with her name on it.

Erdel also helped organize the march, using a bullhorn to give instructions before the parade began. He also handed the bullhorn to Dusty Ray, the pastor of Heartland Baptist Church at Walter Hill where Erdel attends.

Ray led the large group gathered on the Central Magnet School grounds in prayer about their march in opposition to the plans of local Muslims. “They are about oppression,” Ray said in his prayer. “Lord, we’re trying to stop a political movement.” 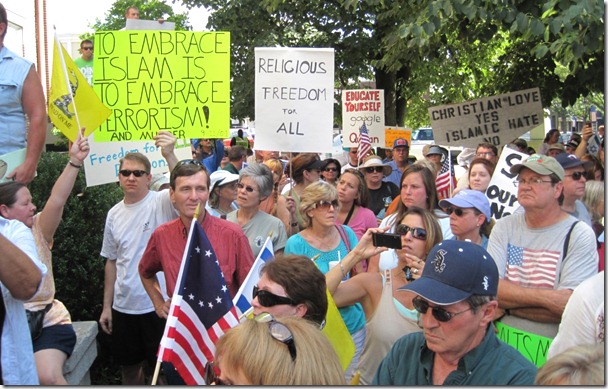