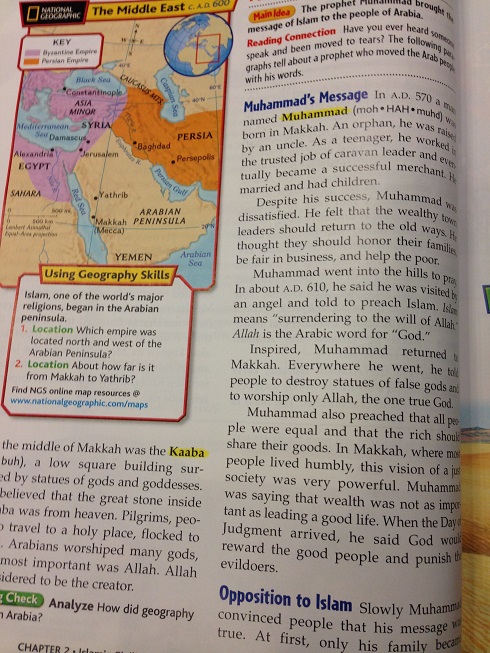 A group of protesters asked the Manhattan Beach Unified School District to review how it teaches Islam at the school board’s meeting on Dec. 10.

A couple stood outside the building’s entrance with signs that said “Stop teaching Islam,” and “No Islam en la escuela” [sic]. As people entered, they handed out pamphlets that said in all caps, “TEACHING ISLAM WITHOUT WARNING LABELS IS LIKE STORING DRAINO IN A SUGAR BOWL.”

During the meeting, 11 individuals explained how they thought the school board should change or eliminate its teaching of Islam.

“Mein Kampf reads like a love story compared to the Quran,” said Steve Amundson. “I propose Islam be removed from the curriculum. It’s more akin to Nazism than a religion.”

The parents of a Manhattan Beach Middle School seventh grader said that they became concerned when their son showed them his homework, which asked students to write down the five tenets of Islam.

“This is the homework that set us off,” said Judy Diethelm as she held up the worksheet. “He had to write down ‘Allah is the one true God.’ The curriculum being presented is indoctrination, and we are opposed to this.”

The boy’s father, Keith Johnson, said that they had asked the school’s principal to remove the textbook, Medieval and Early Modern Times. “We are not anti-Islam, but pro-equality,” he said.

Later, Gary Aven of Redondo Beach asked where the principal, John Jackson, was. “He’s right here,” said a man, indicating the man next to him. “Why didn’t you respond to that parent?” he asked, pointing at Jackson.

“Oh, I did,” said Jackson before Bill Fournell, the newly elected president of the school board, interrupted. “Sir, this isn’t an inquisition,” he said to giggles from a group of high school students.

Once public comment ended, Superintendent Michael Matthews said that the textbook and curriculum were “specifically prescribed” by the state, and that he supported that mandate.

“Scrutiny can be a great thing,” said Matthews. “I’m proud to be a place where people can come to us to speak their mind. But in terms of banning a certain part of the curriculum that people don’t agree with, I’m not going to go along with that.” He invited the protesters to give their feedback to the state.

After the meeting, Jackson and a couple of others discussed how they would exit the building. When asked if other parents had contacted him about the Islam issue, he said no. “Outside the board meetings, they’re the only ones,” he said.

In the hallway outside the meeting, Diethelm said that she wasn’t surprised by the school board’s reaction and that she planned to take the issue to the state and possibly, to court. She said she was working with attorney Bill Becker, who was fighting the same issue in Tennessee.

“We’re disappointed but we expected it,” she said. “We were warned.”

Mira Costa High School senior Dana Sternthal, who went to Manhattan Beach Middle School, attended the meeting for her school newspaper. She gave her thoughts in the parking lot after the meeting.

“As a person who went through the curriculum, I didn’t feel like I was being indoctrinated,” she said. “We learned what Muslim people believe, just like Judaism. It was all evenly taught. They always gave the disclaimer that they were not trying to convert you.”

She said that she thought that the fact that so many of the protesters were from outside of the school district showed that it was “not an issue a lot of people in the district see.”

Her fellow newspaper staffer, junior Diego Marcucci, didn’t attend Manhattan Beach Middle School but attended the meeting. He took issue with a couple of protesters’ focus on a source that said that the Muslim prophet Mohammed married a six-year-old girl.

“That has nothing to do with the tenets of Islam,” he said. “They’re trying to villainize Islam.”