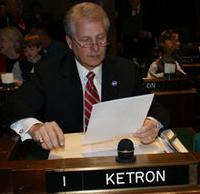 Tennessee lawmakers are rewriting a bill that described Islamic law as a threat to U.S. security and seemed to equate peaceful Muslim practices with terrorism.

State Sen. Bill Ketron and House Speaker Pro Tempore Judd Matheny, both Republicans, offered the revision after questions arose about the proposed bill’s constitutionality. “The revision reflects our original intention to prevent or deter violent or terrorist acts, but does so without any room for misinterpretation regarding the language’s affect on peaceful religious practices,” said Ketron.

Muslim and civil liberty organizations strongly criticized the original bill, saying its focus on Shariah law unfairly targeted Muslims and equated religious rituals such as dietary restrictions with terrorism. The bill now contains no references to Islam, but will allow Tennessee to prosecute those who offer financial or material support to known terrorist entities.

“I think it’s a victory for common sense and legislative restraint,” Ibrahim Hooper, a spokesman for the Council on American-Islamic Relations, told The Tennessean. “This is a win for Tennessee’s Muslim community.”