Ken Livingstone has promised to turn London into a “beacon” for the words of the Prophet Mohammed in a sermon at one of the capital’s most controversial mosques.

Mr Livingstone, Labour’s candidate for mayor of London, pledged to “educate the mass of Londoners” in Islam, saying:  “That will help to cement our city as a beacon that demonstrates the meaning of the words of the Prophet.” Mr Livingstone described Mohammed’s words in his last sermon as “an agenda for all humanity.”

He praised the Prophet’s last sermon, telling his audience: “I want to spend the next four years making sure that every non-Muslim in London knows and understands [its] words and message.” He also promised to “make your life a bit easier financially.”

Hamza was removed in 2003 but the mosque is now controlled by an Islamist organisation, the Muslim Association of Britain, which has been linked to the banned terror group, Hamas.

In the video clip that Gilligan has posted on his blog, Livingstone in fact promises to make London a “beacon” for the principle propounded in the Prophet’s final sermon, that people of all ethnic backgrounds should be treated equally and that different communities should live together in a spirit of mutual respect and understanding. You have to read to the bottom of Gilligan’s piece before he mentions any of that.

But this is the method typically adopted by hack journalists in the right-wing press who want to whip up hostility towards the Muslim community. You get a scaremongering headline followed by a misleading introduction, usually playing to the “Islamification of Britain” myth. Evidence that contradicts this message is sometimes included in the article, to allow the journalist to deflect accusations of misreporting, but is relegated to the end of the article where it has little impact.

As for the North London Central Mosque, the in-depth knowledge, scrupulous research and respect for journalistic accuracy that Gilligan brings to this issue is evaluated here and here.

Update:  If there’s one blog that can outdo even Gilligan’s in dishonest polemic against Livingstone, it is Harry’s Place. Note how the “beacon of Islam” reference, which in Gilligan’s piece is just a misleading summary of Ken’s words, has been transformed by “Lucy Lips” into a direct quote:

Update 2:  Gilligan will no doubt be pleased to hear that the racist football hooligans of the English Defence League’s Casuals United faction also find his journalism inspirational. So much so that they have reproduced his article in its entirety: 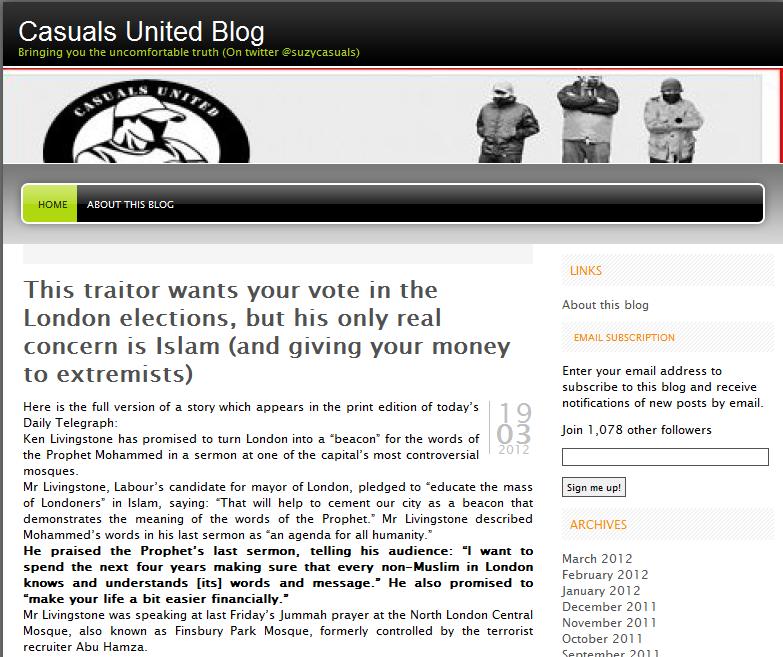