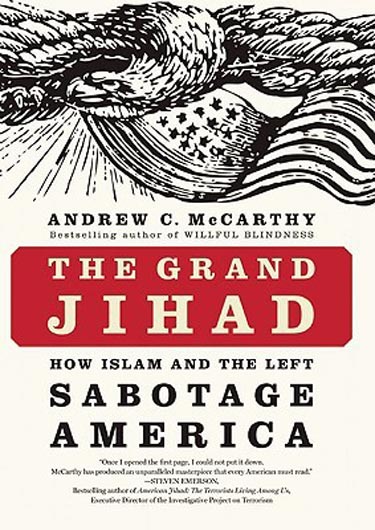 Andrew C. McCarthy outlines the thesis of his new book The Grand Jihad: How Islam and the Left Sabotage America in an interview with Jamie Glazov of FrontPageMag:

“Islamists consider themselves to be in a ‘civilizational jihad’ – their words, not mine – against the West. They use terrorism to great effect, but the battle proceeds on every conceivable front in our society: the media, the academy, and our politics, law and culture. And their aim is nothing less than the ‘destruction of the West’ – as Sheikh Yusuf Qaradawi, the Muslim Brotherhood’s spiritual guide (and probably the most influential Sunni cleric in the world), puts it, ‘to conquer America’ and ‘conquer Europe’….

“The very title of the book, ‘The Grand Jihad’ and the invocation of ‘sabotage’ in the subtitle, is taken from a 1991 internal Muslim Brotherhood memorandum in which the group’s leadership in the U.S. explains to its global leadership in Egypt that the Brothers (or the Ikhwan) consider their work in North America as a ‘grand jihad’ aimed at ‘eliminating and destroying the Western civilization from within’ by ‘sabotage’.”

Glazov chips in: “Sounds like something the Left would embrace. That’s why you argue that Islamists work together with the Left to sabotage America, right?” McCarthy replies: “Exactly.”

McCarthy does, however, exempt some liberals and leftists from his attack – “not all of what might generally be called ‘the Left’ is part of what I am homing in on” – which is fair enough, given the prevalence of liberal Islamophobia and the role played by the likes of Christopher Hitchens. McCarthy’s target is “the hard Left – in America, the Obama Left or the Alinskyite Left – pushing to change our society radically”.