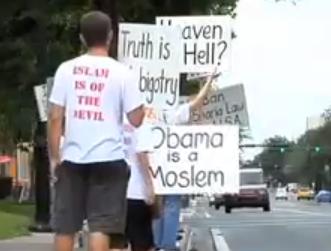 A Gainesville church known for wearing its opinion on its shirts protested an Islamic Center on Monday.

The Dove World Outreach Center, which touts the saying “Islam is of the devil,” portrayed that message outside the Islamic Center of Gainesville at its protest, which lasted about two hours. Protesters said what they were doing is the role of Christians to bring their message to the public.

“They’re not going to change,” Pastor Wayne Sapp said of other churches. “Half of our message is how evil Islam is. The other half of our message is the only reason it has grown in the capacity that it has grown – it’s because the church is so cowardly, it will not stand up for simply what the Bible says, not an interpretation of the Bible, but what it says word for word.”

“How can something like this continue to go on?” Sapp said of Islam. “We have to stand up.”

Members of the Islamic Center referred to the group as a “30-member cult.” Channel 4 talked to a member of the Islamic Center on the phone, but he did not want to go on camera because he said he did not want to give the church any credibility. “There are only 30 of them, meaning they don’t have a lot of support,” the spokesperson said. “If they’re studying the word of Jesus, they’re way off.”