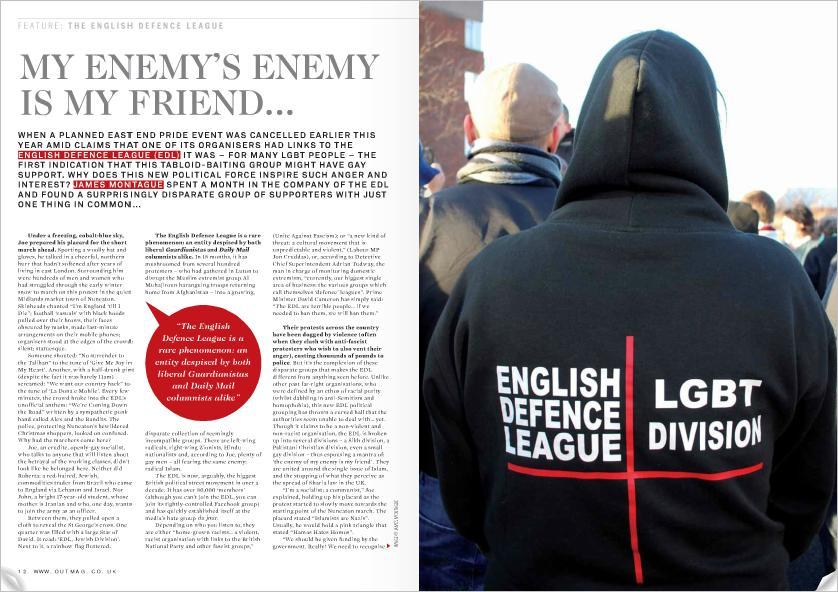 The July issue of the gay magazine Out in the City includes a feature article on the English Defence League by James Montague, based on his participation in a couple of EDL protests back in November last year. Masquerading as a piece of investigative journalism, Montague’s article is little more than an extended puff piece for a gang of violent anti-Muslim racists.

The article is a rewrite of a piece that first appeared at the end of last year in a publication called Delayed Gratification, under the title “On the march with the English Defence League”. And even though it has been slightly updated – notably with the addition of a reference to the dispute over a planned East End Pride march earlier this year – much of it has been by-passed by subsequent developments. Which raises the question of why Out in the Citydecided to splash this piece of second-hand pro-EDL propaganda across four pages of its current issue.

Perhaps the answer is to be found in the standfirst to the article, which refers to the cancellation of the East End Pride march “amid claims that one of its organisers had links to the English Defence League”. It looks like Out in the City readers are being invited to conclude, on the basis of Montague’s largely favourable report, that the EDL aren’t so bad really and that the opposition to East End Pride because of its organisers’ far-right connections was an overreaction. (It is worth noting that Linda Riley of Square Peg Media, the magazine’s publishers, was a signatory to the notorious Islamophobic Homintern statement that falsely accused the East London Mosque of responsibility for a rise in homophobic attacks in Tower Hamlets.)

Montague’s portrait of the EDL centres on a leader of the organisation’s LGBT division, who is referred to only as Joe (presumably the individual who operates under the name Joe Bloggs and reportedly had a hand in setting up both the LGBT and Jewish divisions). He is allowed to spout his pro-EDL bullshit without challenge. Joe, we are told, “believes that what he sees as the growing Islamification of Britain is the biggest threat that the country’s gay community has ever faced”. Montague doesn’t bother to point out that the “Islamification” of a country in which non-Muslims make up 97% of the population is nothing more than a paranoid racist fantasy. In the section on East End Pride, Joe is provided with a platform to denounce the cancellation of the march and declare that “one of the biggest enemies to warning the gay community about the dangers of Islamic extremism has been the liberal gay community”.

Some of Joe’s claims are so outlandish as to provoke incredulous laughter. “We are standing up for tolerance, diversity and human rights”, Montague reports him as saying. A quick scroll through the endless stream of hate-filled rants and open threats of anti-Muslim violence that fill the EDL’s Facebook page would have shown Montague the absurdity of that claim. (See for example this selection of comments by EDL supporters in response to the TV programme Does Britain have a problem with Muslims?) But the nearest we get to an exposure of the EDL’s endemic racism is a reference to two of its supporters shouting “Pakis” at a group of Asian youths. Montague merely observes: “Occasionally, though, the self-aware political correctness slipped.”

Montague even uncritically repeats Joe’s assertion that fascists have been “weeded out” of the EDL. But it wouldn’t have taken any in-depth research to expose the spurious character of this claim too. In October 2010 Searchlight published a detailed analysis of the far-right background of prominent figures in the EDL. And earlier that year the BNP links of EDL leader “Tommy Robinson” (Stephen Yaxley Lennon) and his cousin, current EDL co-leader Kevin Carroll, had been exposed by Searchlight and Three Counties Unity. Indeed, at the beginning of November 2010, the same month that Montague joined the EDL at its protests in London and Nuneaton, Three Counties Unity posted a photo of Lennon at a BNP meeting in 2007 listening intently to a speech by veteran neo-Nazi Richard Edmonds. Yet Montague chooses to ignore all this.

Montague also provides a sympathetic profile Roberta Moore, the then leader of the EDL’s Jewish division and a friend of Joe’s (in December 2010 the two of them were among a group of EDLers who disrupted a One Society Many Cultures conference in London). Like Joe, Moore is allowed to recite her lies without any critical questioning from Montague. He quotes Moore as saying that the EDL are “fighting against the prejudice against women, Jews, Hindus, gays, anyone. It’s not Islam. We are against Islamists.” This is from a woman who is on record as stating: “We are anti-Islam, as everyone should be. Islam is not a religion, but a cult. It has all the features of a cult, like the religions of Jim Jones and David Koresh.” Needless to say, Montague has no interest in highlighting that discrepancy.

Nor does Montague think it worth mentioning that earlier this year Moore had a public falling out with the EDL leadership over her support for the Jewish Task Force, a far-right Zionist group in the US led by a convicted terrorist. The EDL papered over that difference but just recently the compromise collapsed when Moore resigned from the EDL to take up what appears to be a job offerfrom the SIOA/SIOE “counter-jihadist” alliance headed by Pamela Geller, Robert Spencer and Anders Gravers. Moore justified her decision to leave the EDL by claiming that she was opposed to the growing influence within the organisation of the very Nazi elements that her friend Joe had assured Montague were being “weeded out” of the EDL.

One particular individual Moore had in mind was Hel Gower, the head of EDL admin and PA to the EDL leadership. Gower is an admirer of the British First Party, which is the political wing of an openly Nazi groupuscule called the November 9th Society (opinions differ over whether the date is a reference to Kristallnacht, the Bierhalle Putsch, or both). But who is Moore to come over all indignant about her opponents’ associations with neo-Nazism? She herself was a founding committee member and co-chairperson of another far-right groupuscule, the English Nationalist Alliance, which the EDL leadership proscribed earlier this year on the grounds that ENA chairperson Bill Baker has “links with Nazi groups like Combat 18 and Redwatch”.

Moore hasn’t just fallen out with the EDL leadership but with her friend “Joe Bloggs”, who sided with the leadership in the split. He has complained that he was denounced by a leading supporter of Moore in the EDL Jewish division as a “retarded, dhimmi, kapo, Nazi turd”, adding that “it is that type of insane response that leads others to be hostile to the Jewish Division”. So the picture painted by Montague of an EDL based on a stern rejection of fascism and featuring a cosy relationship between its LGBT and Jewish divisions rather falls apart, doesn’t it? The Jewish division now claims that the EDL has been taken over by Nazis and denounces the founder of the LGBT division in the most vitriolic terms, while the latter accuses the Jewish division of insanity.

Hopefully this will encourage the LGBT community to treat Montague’s disgraceful apologia for the EDL, along with the editorial team who decided to publish it in Out in the City, with the contempt they both deserve.