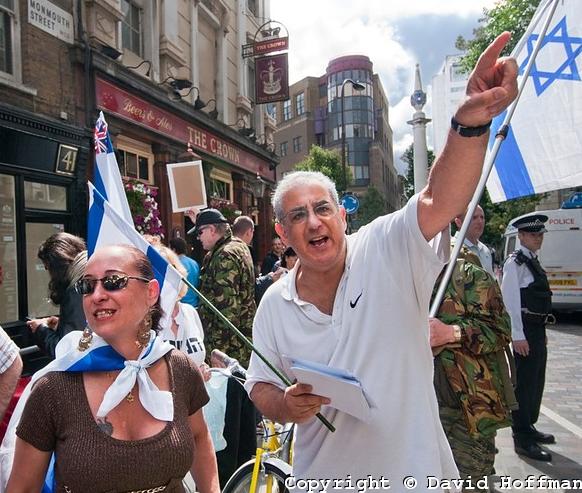 The leadership of the English Defence League has distanced itself from the group’s Jewish Division, because of its partnership with the far-right American group Jewish Task Force.

The head of the EDL’s Jewish division, Roberta Moore [pictured, with Jonathan Hoffman], previously announced that the group was working with the JTF, whose leader Victor Vancier has been imprisoned for terrorism offences.

This week the EDL’s leadership issued a statement saying that if the Jewish Division continued relations with the JTF, they would sever ties with her. It said: “A member of the Jewish Division this week decided to link herself with terrorist organisation JTF. This was the decision and wishes of one single individual within the EDL, and does not mean that the EDL is linked with this movement.

But Ms Moore said she was determined to continue the affiliation. She said the EDL leadership who had released the statement were “complete idiots,” adding: “I have put my foot down; I am the one in contact with the JTF. If some people don’t like it, then screw them. There are lots of Jewish people very upset that the EDL put out that statement – and I haven’t received any personal messages telling me to cut off contact with Victor.”

However, the EDL made it clear that they and Ms Moore were at odds on the matter. A spokesman said: “The EDL never has and never will have any affiliations with the Jewish Task Force. Unfortunately Ms Moore has caused a great deal of trouble and unrest within the EDL because of her gung-ho attitude.”

Victor Vancier spent five years in prison from 1987 for 18 bomb attacks against Soviet targets in the US to protest against the treatment of Soviet Jews.

He posted on the JTF forum: “There are elements in the EDL who desperately want to be accepted by the leftwing establishment and the media. These elements have no principles or courage. Roberta Moore and the Jewish Division represent courageous and noble elements. If the EDL is not willing to work with JTF, then they are rejecting all rightwing Jews, evangelical Christians and others who believe in the right of the Jewish people to the entire land of Israel.”

So, the EDL leadership announced a week ago that the organisation “will have no option but to sever its links with the Jewish division” if the latter continues its connection with the JTF – and Roberta Moore says “screw them”. Well, has the EDL severed its links with its Jewish division, or even with Moore as an individual? No sign of it so far.

Update:  The EDL leadership has issued a further statement in which they directly address Roberta Moore: “we don’t approve of your discussions with the JTF. We hope that this was just an error in judgement”. Well, that’s cracking down hard on Moore, isn’t it? Clearly we can rely on the EDL leadership to take a firm stand against any of their members who are found to have links with terrorists.