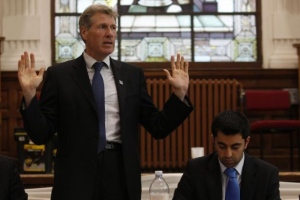 Glasgow’s Muslims are boycotting the city’s main airport and choosing to fly from Manchester because of perceived harassment from counter-terrorism officers, it was claimed last night.

The allegations were made at a public meeting called to discuss concerns held by parts of the Asian community that powers held by police, ports and immigration officials to question travellers at travel hubs were abused, with travellers singled out solely on the basis of their race or skin colour.

Justice Secretary Kenny MacAskill told around 70 people at Pollokshields Burgh Hall in Glasgow that Schedule 7 of the Terrorism Act 2000 was a necessary tool in fighting global terrorism. He admitted there had been occasions when the powers had been used inappropriately, but said it was not deliberately used to target people because of their ethnicity.

But lawyer Aamer Anwar said some Muslims had become so disillusioned at the way they were treated at Glasgow Airport they decided to take their business south of the Border. He said he would challenge police to deliver statistics on how much counter-terrorism intelligence had been delivered as a result of questioning travellers at the airport.

He said: “The questions are offensive, rude and intimidating in the way they are carried out. The police may like to claim they are collecting intelligence and they are like James Bond but I think they are coming across more like Austin Powers.” Mr Anwar said one Afghan man living in Glasgow returned from a trip home to be asked by officers if he knew Osama Bin Laden or had ever visited the Tora Bora mountains, where the al Qaeda leader hid out.

He added: “It seems as if there is racial profiling going on at Glasgow Airport and what the people from the community are doing is using Manchester Airport and other airports to fly out. Everything is not fine at Glasgow Airport. People do not accept the way they are being treated. They are not terrorists and they expect to be able to go about their business.”