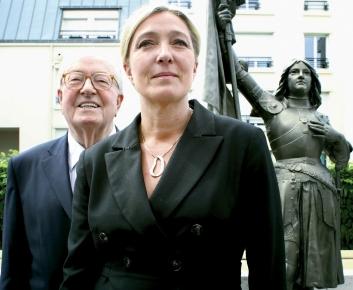 An opinion poll suggesting far-right leader Marine Le Pen could win the first round of next year’s presidential election has caused a shock in France.

The survey for Le Parisien newspaper puts the National Front leader, who took over from her father Jean-Marie in January, ahead of all other candidates. It gives her 23% of the vote, 2% ahead of both President Nicolas Sarkozy and Socialist leader Martine Aubry.

However, some analysts question the accuracy of the online poll. Online surveys are arguably less reliable than telephone polling, and Le Parisien‘s poll assumes Ms Aubry will be chosen as the Socialists’ candidate, while the party has yet to decide.

Jean-Marie Le Pen was the shock runner-up in the first round of the 2002 election, only to be massively defeated in the second against Jacques Chirac.

Nonetheless, for the new far-right leader to be ahead of both President Sarkozy and Ms Aubry is an astonishing result, the BBC’s Hugh Schofield reports from Paris. A story on the website of the left-of-centre daily Liberation says “politicians are hesitating between prudence and panic after the poll”.

On the basis of this opinion poll of 1,618 people, Ms Le Pen would automatically qualify for the second round run-off with one or other of the two mainstream party leaders.