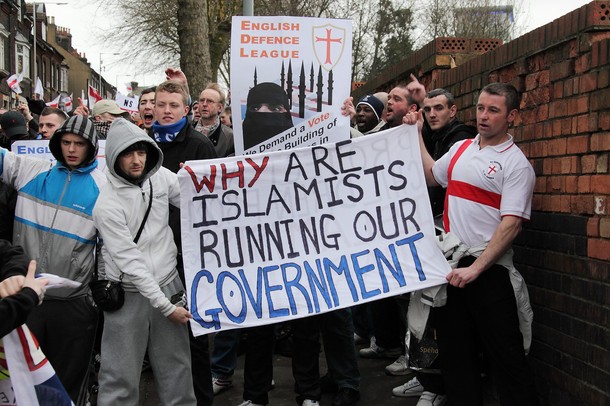 The leader of the far-right English Defence League last night confirmed that the group would be holding talks with a view to becoming a legitimate political party.

Tommy Robinson, whose real name is Stephen Yaxley-Lennon, said last night: “We’re having a meeting this week with politically minded people and we’re discussing the options. We know the support we’ve got from one end of the country to the other because we talk sense. So we’re having more discussions this week. It’s something we’re seriously looking at.

“We’ve been meeting with top political people for a year about this and now we’re getting close. We’ve been sitting down with a couple of lads who are posh-speaking, public school boys, who have been in politics before, and we’re discussing with them where it can go.”

Supporters of the group, which formed in 2009, have often been involved in violent scuffles with anti-fascist demonstrators in areas with large Muslim populations including Luton, Birmingham, Stoke-on-Trent and Bradford. Several journalists have received anonymous threats in the past when covering EDL demonstrations.

In a bizarre twist, the move towards legitimisation for the far-right group is said have come after the Daily Star newspaper last month published what Richard Peppiatt, a former reporter on the paper, believed at the time to be a false story. The article stated that the EDL planned to field candidates at a general election. Last week Peppiatt quit the tabloid, admitting he produced made-stories for the Star and saying he believed it gave sympathetic coverage to the EDL.

The Independent on Sunday understands one reporter, from a different news organisation, who recently interviewed Mr Robinson, claims that the EDL had the idea to become a political party after seeing the Star‘s fabricated article.

But Mr Robinson distanced himself from that suggestion, saying starting a political party was something the EDL had intended to do for at least a year.

Mr Peppiatt said of his decision to quit: “Going public has been at once the easiest and most difficult decision I’ve ever had to make. The messages of support from all quarters of the media and beyond, has confirmed to me I’m fighting the good fight, if belatedly. Obviously it was shocking when the attempts to intimidate me began, but it only served to harden my resolve.”

The Daily Star rejected the suggestion it supports far-right organisations. “For the record, the Daily Star editorial policy does not hold any negativity towards Islam and the paper never, and does not endorse the EDL.”

Since making his resignation letter public, Mr Peppiatt has received numerous emails, phone calls and text messages from unknown sources. One such message says: “We r (sic) doing a KISS AND TELL on u.” Whilst an email reads, “I’m one of your FB [Facebook] friends and it’s about time you were honest with people. Stop the bullshit Pepps. We all know everything about you. Meet me at 8pm outside GH.”