Press TV reports from a demonstration in Gennevilliers against the sacking (since withdrawn) of four Muslims workers at a summer camp run by the local authority. They were dismissed on the grounds that their fasting for Ramadan supposedly made them unfit to carry out their duties and they represented a threat to the safety of the young people they were supervising.

Gennevilliers has a Communist mayor, Jacques Bourgoin, who initially supported the sackings, and his position was strongly supported by the far-right Front National who stated: “Those who oppose this wise decision are making a mockery of the principles of safety and secularism.”

Press TV inteviews Marwan Muhammad of the Collectif contre l’Islamophobie en France who explains: “We have a hardcore anti-religion front in France. So we have of course on the right wing your traditional racism, anti-Arab anti-Muslim hate, which clearly says that Muslims and Islam don’t belong here. But you also have on the left-wing side of the political game an anti-Muslim front that is coming from a different angle. It is coming from the angle of secularism.”

As the statement by the FN spokesperson indicates, Marine Le Pen’s party is increasingly hiding its ugly racism behind a secularist rhetoric previously associated with the left. A large section of the French left, meanwhile, has been led by its narrow and dogmatic interpretation of secularism to justify the sort of discrimination against the Muslim minority that wins them the applause of the far right.

Marwan adds: “This type of discrimination is happening in every sort of situation, in the working environment, at school, at universities, in restaurants and cities. So Islamophobia as a phenomenon is not stopping because the mayor changed his decision, and that’s why we’re here today.” 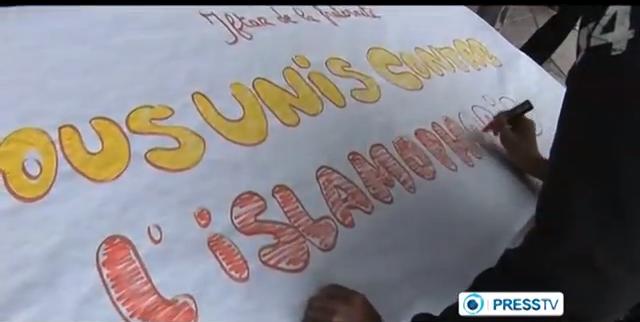