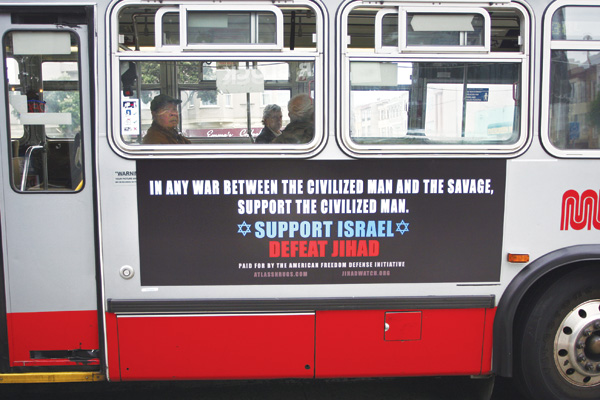 American Muslims for Palestine, the Asian Law Caucus, the Council on American-Islamic Relations and Jewish Voice for Peace have issued a joint press release cautiously welcoming a statement by the San Francisco Municipal Transportation Agency in response to complaints about the anti-Palestinian and Islamophobic advertisements that Pamela Geller’s so-called American Freedom Defense Initiative has placed on San Francisco buses.

The SFMTA has said that although the First Amendment prevents it from removing them, Geller’s advertisements have “no value in facilitating constructive dialogue or advancing the cause of peace and justice”. The statement went on to commit the SFMTA to directing all resulting advertising revenue to the SF Human Rights Commission.

It would, of course, have been preferable if the SFMTA had defied Geller and taken her on in the courts. She pursued her lawsuit in New York on the basis that the city’s Metropolitan Transport Authority had previously allowed ads critical of Israel and that she was being discriminated against. The SFMTA, however, has a policy of refusing all political advertising, so Geller’s case would surely have been much weaker here.

Still, at least Geller’s money will be going to support an organisation that really does defend freedom.

And Sheila Musaji, “Bus ads: Of savages and idiots”, The American Muslim, 15 August 2012