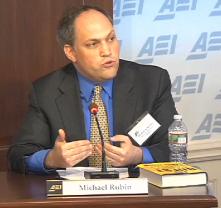 Nathan Lean reports that one of the oldest and most influential US conservative think tanks, the American Enterprise Institute for Public Policy Research (AEI), has announced that its resident scholar Michael Rubin will join Robert Spencer of Jihad Watch on a 10-day tour of Turkey, which has been organised by the David Horowitz Freedom Center.

Lean writes: “Do Rubin and the AEI really want to be bedfellows with people like Spencer? Espousing staunchly conservative worldviews is one thing, but abandoning the right side of the political spectrum to flirt with anti-Muslim fanatics is another. It is evidence that the Islamophobia industry is becoming dangerously infused into a discourse that should be working to exclude such blatant bigotry.”