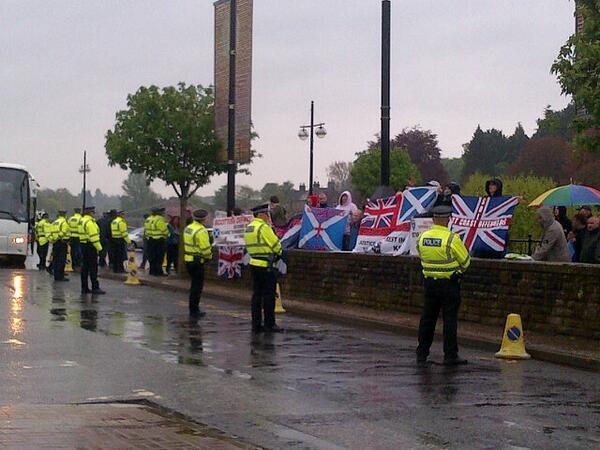 Three men have appeared in court following a demonstration in Dumfries at the weekend. The Scottish Defence League were protesting over plans to expand the use of a local mosque, while the Dumfries TUC held a counter protest.

John Banks, 55, from Doncaster, David Kyle, 29, from Ayr, and Josh Wood, 29, from Edinburgh, appeared in court in Dumfries on public order offences. Mr Banks and Mr Kyle denied the charges and trials were fixed for December. During their separate appearances before Sheriff Alistair Carmichael, both men pleaded not guilty to behaving in a threatening or abusive manner at Annan Road.

A sentence was deferred for a month on Mr Wood, who admitted behaving in a threatening or abusive manner by wearing a badge displaying religious hatred. Sheriff Carmichael called for background reports on the 21-year-old.