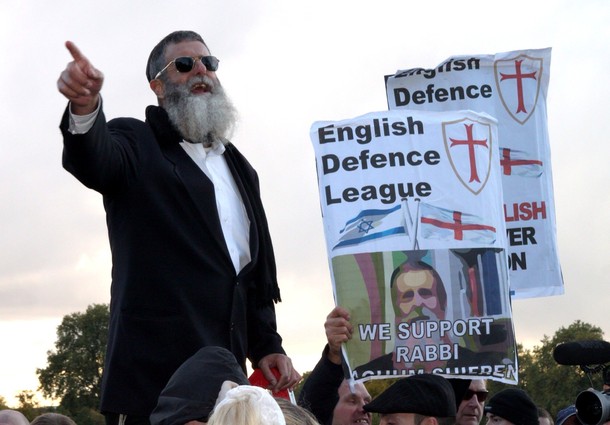 Three English Defence League demonstrators have been charged with affray and public order offences after a scuffle with Muslim hecklers at Speakers Corner.

Shortly after their demonstration on Sunday outside the Israeli Embassy in Kensington, EDL supporters made their way to Hyde Park where Rabbi Nachum Shifren, the so-called “surfing rabbi” from California, gave a short speech. The rabbi had earlier called Muslims “dogs” and told the EDL “We will never surrender to the sword of Islam.”

Rabbi Shifren was heckled by passers-by and scuffles allegedly broke out with EDL members. Bryan Kelso, 28, from Luton, Christopher Long, 38, from Roehampton and Brian Bristow, 37, from Doncaster were arrested and charged with affray and public order offences. The men have been bailed to appear at City of Westminster Magistrates’ Court on November 3.