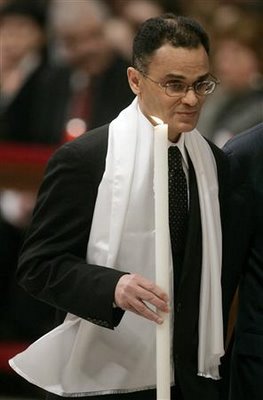 The Muslim-born journalist baptized by Pope Benedict XVI at Easter asked the pope to tell his top aide for relations with Muslims that Islam is not an intrinsically good religion and that Islamic terrorism is not the result of a minority gone astray.

As the Vatican was preparing to host the first meeting of the Catholic-Muslim Forum Nov. 4-6, Magdi Allam, a longtime critic of the Muslim faith of his parents, issued an open letter to Pope Benedict that included criticism of Cardinal Jean-Louis Tauran, president of the Pontifical Council for Interreligious Dialogue.

He told the pope that it “is vital for the common good of the Catholic Church, the general interest of Christianity and of Western civilization itself” that the pope make a pronouncement in “a clear and binding way” on the question of whether Islam is a valid religion.

Allam told Pope Benedict he specifically objected to Cardinal Tauran telling a conference in August that Islam itself promotes peace but that “‘some believers’ have ‘betrayed their faith’,” using it as a pretext for violence.

“The objective reality, I tell you with all sincerity and animated by a constructive intent, is exactly the opposite of what Cardinal Tauran imagines,” Allam told the pope. “Islamic extremism and terrorism are the mature fruit” of following “the sayings of the Quran and the thought and action of Mohammed.”

Damian Thompson, editor of the Catholic Herald, broadly agrees. He demands: “will anyone dare discuss the hate-filled rhetoric ofmainstream Islam when the Vatican hosts its first Catholic-Muslim Forum next week? Or will both sides maintain the doctrine – promulgated by every public institution in Britain – that the jihadist and anti-semitic sentiments encouraged by Arab governments and Muslim community leaders are a distortion of Islam?”