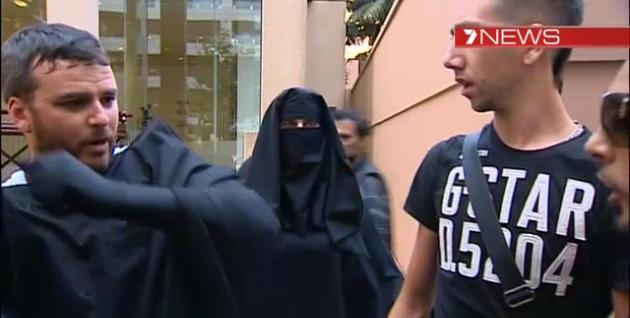 Ugly scenes erupted between a group of burqa-clad protesters and a Muslim man outside NSW State Parliament in Sydney today.

A group of men dressed in the veiled female garb as a publicity stunt to try and get the outfit banned. Members of the group Faceless ventured into a Sydney CBD courthouse, pub and bank without drawing much reaction, but faced a stronger backlash later outside parliament. “It’s got no place in Australia – it’s an affront to a civilised country like Australia,” Faceless member Nicholas Folkes said of the burqa.

Nine News filmed a man outraged by the protesters, shouting in their faces and pulling off their veils. “That’s what I think of you,” the man said after spitting on the ground. The argument became more heated when a man connected to Faceless referred to the prophet Mohammed as “a rat”.

Folkes (who lost his veil during the confrontation) is the Sydney organiser of the far-right Australian Protectionist Party. Another of the “burqa” demonstrators was APP supporter Sergio Redegalli, the man responsible for the notorious “Say No to Burqas“/”Say No to Fiona Byrne” mural.