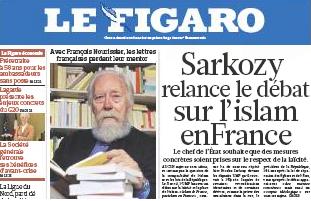 Just days after saying that multiculturalism had failed in France, President Sarkozy is launching a debate on religion and the secular state, asking what limits should be placed on Islam.

Speaking to his UMP MPs at the Élysée, he said he wanted concrete measures on the place of Islam in France and its compatibility with the country’s secular laws.

He said the French had “paid dear” for their blindness towards immigration during the 1980s, when debate was taboo. “There was a growing disruption between the concerns of the media and the concerns of ordinary French people. The racists of yesterday are today’s populists.”

With the Martine Le Pen’s Front National rising in the polls, Mr Sarkozy adopted one of Ms Le Pen’s own themes last year, and expressed disapproval of the sight of Muslim street preachers, saying: “We had a debate on the burqa and it was well done. Now we should have a debate on street preachers. In a secular country, there’s no reason to have calls to prayer.”

Mr Sarkozy hopes to pull the rug from under the feet of the Front National by making radical Islam incompatible with the values of France.

He has made it one of the priorities for 2011 in the run-up to next year’s presidential election, echoing his words in last week’s televised talk with French citizens: “The truth is that in all our democracies we have been too preoccupied with the identity of those who arrived and not enough with the identity of the country that welcomed them.”