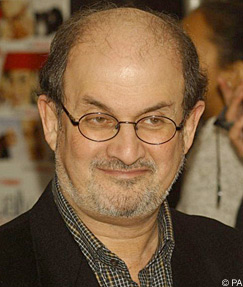 “The Satanic Verses” author Salman Rushdie is not a great fan of organized worship but believes an Islamic center and mosque should be permitted two blocks from ground zero.

Rushdie’s satirical novel led in the 1980s to worldwide riots by Muslims and calls for his death. He says he understands the “sensitivities” of building the site close to where thousands were killed during on Sept. 11, 2001.

But he says First Amendment rights to freedom of speech and religion should be honored. He adds that he is “not personally” a lover of mosques or any place of worship. But he says that if people “want a mosque, it seems absolutely right they should have it.”

See also the New York Post, which quotes Rushdie as saying of the Park51 controversy: “It’s just a stupid argument. Of course they should be able to build a mosque there.”