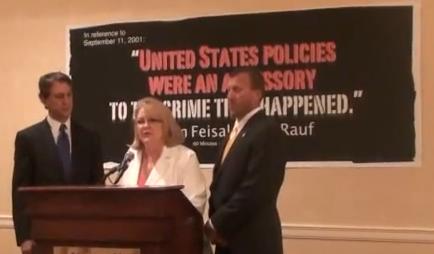 Republican gubernatorial candidate Rick Lazio challenged his Democratic opponent Wednesday morning to examine the legality of the funding for the proposed mosque near Ground Zero. “New Yorkers have a right to feel safe and be safe,” Lazio told reporters in Lower Manhattan. “There are serious security questions about the appropriateness of this mosque.”

Lazio demanded Attorney General Cuomo figure out where the backers of the Cordoba Mosque expect to get $100 million to build it. “Anyone who has evidence of wrongdoing should send it to us and we will review it,” Cuomo replied in a statement released later Wednesday.

In a letter he sent to Cuomo, Lazio cited press accounts that Imam Feisal Abdul Rauf, who’s spearheading the mosque’s construction, is a “key figure” in an organization that funded the flotilla that sought to break Israel’s Gaza blockade.

Debra Burlingame, whose brother Charles was a pilot on the plane terrorists crashed into the Pentagon on 9/11, said the Imam has written about his hopes of bringing strict Islamic Shariah law to the United States. “He means to use the Ground Zero location of the mosque to ‘leverage’ people to Islam,” said Burlingame, the co-founder of 9/11 Families for a Safe and Strong America.