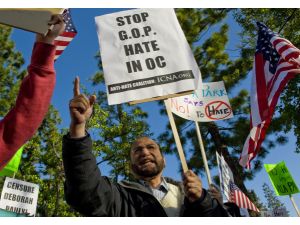 About 500 demonstrators from various groups marched and chanted slogans against or in support of Councilwoman Deborah Pauly in front of Villa Park City Hall on Tuesday evening.

The large majority of demonstrators were Muslim supporters who organized in response to a speech by Pauly last month at a Yorba Linda rally. About 50 people showed up Tuesday night to support Pauly.

The two groups faced off on the walkway in front of City Hall before the council meeting shouting at one another through bullhorns and displaying signs with phrases such as, “I’m a Muslim not a terrorist,” and “Deborah Pauly is a patriot.” The protesters also chanted at and over each other: “Deborah Pauly, I’m your neighbor. Why are you such a hater,” “No Sharia law,” and “Hey, hey, ho, ho, the racism’s got to go.”

The protest was largely peaceful, but the exchanges among the demonstrators were heated. A pro-Muslim supporter shouted at someone “You don’t even know what you’re fighting for, you racist pig.” The Pauly supporter retorted: “You’re a disgrace.”

The demonstrations are a response to a speech Pauly gave at a rally during an Islamic Circle of North America fund-raiser Feb. 13, which many have interpreted as anti-Muslim. Her remarks are prominent in a YouTube video created by the Council on American-Islam Relations.

In the packed council chambers after the protest, the public comment section of the council meeting became a heated argument over topics ranging from Pauly’s speech to the merits of Shariah law. Sheriff’s officers stood at the doors and prevented anyone who wasn’t on the speaker’s list from entering.

Pauly listened as Muslim constituents and Pauly supporters repeatedly asked her to apologize or affirm her words with audible cheers and boos punctuating each comment from the hundreds of protesters outside.