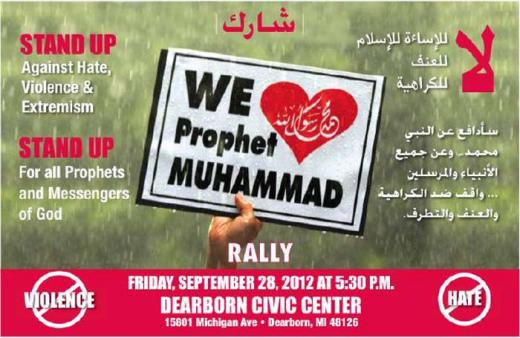 More than 1,000 rallied Friday night in Dearborn against the anti-Islam movie that has sparked protests around the world. Organized by Arab-American leaders, the rally was the third protest in metro Detroit over the movie, the biggest one yet.

“Say No to Hate-Mongering, Say No to Islamophobia,” read a large banner at the rally in Dearborn’s civic center, the Ford Performing Arts & Community Center. On the podium was a sign that read: “We (heart symbol) Prophet Muhammad.”

“United we stand, divided we fall,” Donnell White, executive director of the Detroit branch of the NAACP, told the crowd. “We stand with you as our brothers and sisters.”

Judge Halloran spoke about his Irish Catholic roots, noting that his ethnic group often suffered discrimination decades ago after they arrived in the U.S. They “were not looked at positively,” he said. And now, Muslims are facing bias that needs to be challenged, Halloran said. “We need to speak out against discrimination against Islam,” he said.

Osama Siblani, publisher of the Arab-American News, told the crowd that the people who made the anti-Islam film “are not (true) Americans. They are against what America stands for.”

Tarek Baydoun, an attorney from Dearborn, said “the growing tide of Islamophobia” is what prompted the rally. “It’s relentless,” Baydoun said of anti-Islam sentiment in the U.S.

For an example of the refusal among some Americans to address the issues intelligently and with some basic honesty, see Henry Payne, “Dearborn Muslims rally against the First Amendment”, Detroit News blog, 28 September 2012

According to Payne, Osama Siblani’s call for “deterrent legal measures against those individuals or groups that want to damage relations between people, spread hate and incite violence” amounts to a blasphemy law.