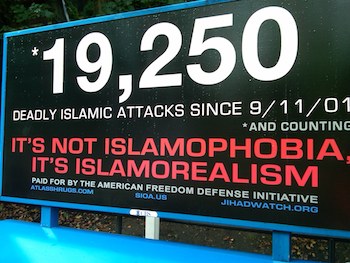 “The above ads are appearing at Metro-North stations in New York. A continuation of Islamophobic activists Robert Spencer andPamela Geller‘s AFDI/SIOA racist and anti-Muslim/Islam advertisement campaign. In light of recent hate attacks, 8 over a period of 11 days, and another possible attack yesterday, theattempted firebombing of a Muslim family’s home in Panama City, Florida, can we not consider such advertisements to be an incitement to violence?”