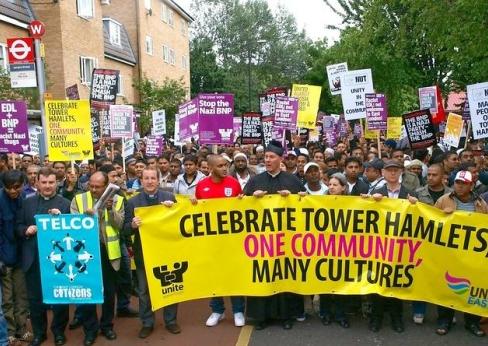 “London’s East End: a melting pot simmers closer to the boil.” This is the scaremongering headline to a report on Tower Hamlets in today’s Sunday Telegraph.

The article notes that the “Muslim patrols” panic has “sparked headlines internationally. Journalists from Russia, Sweden and Germany have descended on the borough”. Needless to say, rather than expose this as a hysterical over-reaction fuelled by Islamophobia, the article uses it as a springboard to paint a picture of a borough riven by communal strife provoked by Muslim extremists.

Tower Hamlets is one of numerous areas in England – others include parts of Bradford, Dewsbury, Leicester and Luton – where Muslims Against Crusades, a banned extremist group that burnt poppies on Remembrance Day, has announced it wants to impose sharia law. Al-Muhajiroun, an Islamist group proscribed by the Home Office, is also said to be active here.

The vigilante patrols are the latest in a long line of incidents, which have included homophobic attacks and the appearance of stickers branding the area a ‘Sharia Zone’ and ‘Gay-free’. Maajid Nawaz, chairman of the counter-extremism think tank the Quilliam Foundation, suggested last month that the ‘Muslim patrols’ could be ‘a sign of things to come’ as a pattern of extremism spreads across Europe.

The latter reference is to Nawaz’s lunatic article in the Times in which he suggested, in all seriousness, that there was a real prospect of the “Muslim patrols” turning to terrorism.

Nor is the Islamist threat limited to Anjem Choudary’s band of idiot followers. According to the Telegraph, the extremists apparently include Tower Hamlets mayor Lutfur Rahman, who has “close links to the fundamentalist group, the Islamic Forum of Europe” and has been “accused of presiding over an administration that is seeking to ‘Islamicise’ Tower Hamlets by, among other things, clamping down on strip clubs and a gay bar”.

This picture is reinforced by the usual dodgy demographics. We are told that the latest census figures reveal that “Bengalis have now overtaken white British to become the largest ethnic group in the borough”. In reality, the British Bangladeshi community in Tower Hamlets has fallen slightly in percentage terms over the past decade, from 33.43% in 2001 to 32.03% in 2011. The reason they are now the largest ethnic group is that the White British community has declined from 42.91% in 2001 to 31.18% in 2011. This has been accompanied by a rise in the percentage of people from other minority communities, notably white people of non-British origin – the White Other category has increased from 6.54% to 12.42%. Rather than there being some “Muslim takeover” of Tower Hamlets, as the Telegraph seeks to suggest, what we are seeing is a strengthening of the borough’s multicultural character.

As is usually the way with Islamophobic articles in the right-wing press, you have to read to the end of the piece before you get to hear an alternative, and more realistic, view of the situation. That way, newspapers can run reports with scaremongering headlines and paranoid claims about Islamification and Muslim extremism, while covering themselves against charges of bias. After all, they can argue, they allowed opposing opinions to be expressed.

Thus Salman Farsi of East London Mosque is quoted as blaming the Muslim patrol stunt on “fanatics coming into the area from other parts of London to stoke up tensions”. He describes them as part of “a fringe minority of our community who clash with the proper teachings of Islam” and whose actions are “at odds with Islamic and British values and traditions”. Farsi argues that, rather than being a “fragile environment”, there is “a lot of co-existence and harmony” in Tower Hamlets. However, this hardly changes the overall thrust of the Telegraph report.

Similarly, Liam Bushell, manager of the White Swan pub, which is supposedly threatened by Lutfur Rahman’s mythical plan to Islamicise the borough, describes the “Muslim patrol” as a one-off and defends Tower Hamlets’ reputation as “a very multicultural place” – only to have his views characterised as “typically defiant talk in an area that historically refuses to be cowed”. The article concludes ominously: “In the latest wave of extremism, however, it is hard not to wonder how long this slice of East End life will remain.”