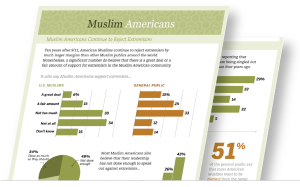 More than half of Muslim Americans in a new poll say government anti-terrorism policies single them out for increased surveillance and monitoring, and many report increased cases of name-calling, threats and harassment by airport security, law enforcement officers and others.

Still, most Muslim Americans say they are satisfied with the way things are going in the U.S. and rate their communities highly as places to live.

The survey by the Pew Research Center, one of the most exhaustive ever of the country’s Muslims, finds no signs of rising alienation or anger among Muslim-Americans despite recent U.S. government concerns about homegrown Islamic terrorism and controversy over the building of mosques.

“This confirms what we’ve said all along: American Muslims are well integrated and happy, but with a kind of lingering sense of being besieged by growing anti-Muslim sentiment in our society,” said Ibrahim Hooper, spokesman for the Council on American-Islamic Relations, a Washington, D.C.-based Muslim civil rights group. “People contact us every day about concerns they’ve had, particularly with law enforcement authorities in this post-9/11 era.”