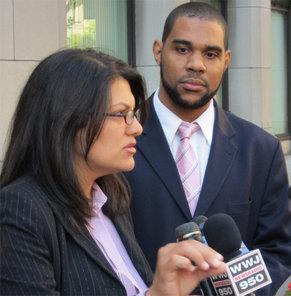 Detroit — Prominent Muslim leaders and others on Tuesday announced their opposition to a bill to ban “foreign laws” in Michigan, calling the measure a racist attack on Islam.

“I’m appalled as the first Muslim woman serving in the Michigan legislation,” Tlaib said. “This is taking a community and casting suspicion on them … targeting them, and it’s completely wrong. It’s racism at its core.”

Santana said the bill “polarizes people based on fear”. “Dave Agema has a history of making bigoted comments,” Santana said.

Dawud Walid, executive director of the Council on American-Islamic Relations, attended the event Tuesday and said his group plans to file a lawsuit if the legislation is passed. A House committee has yet to take up the bill.

Darnell White, the interim director of the Detroit Branch NAACP said, “We have too many issues – jobs, (home) foreclosures – to be focused on this”. “This is wrong and we denounced this type of legislation,” White said at Tuesday’s news conference.