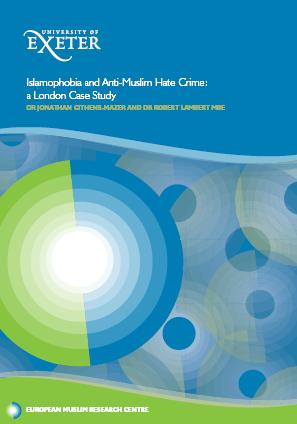 A rise in the number of hate crimes against Muslims in London is being encouraged by mainstream politicians and sections of the media, a study written by a former Scotland Yard counter-terrorism officer, published yesterday, says. Attacks ranging from death threats and murder to persistent low-level assaults, such as spitting and name-calling, are in part whipped up by extremists and sections of mainstream society, the study says.

“The report provides prima facie and empirical evidence to demonstrate that assailants of Muslims are invariably motivated by a negative view of Muslims they have acquired from either mainstream or extremist nationalist reports or commentaries in the media,” it says. “Islamophobic, negative and unwarranted portrayals of Muslim London as Londonistan and Muslim Londoners as terrorists, sympathisers and subversives in sections of the media appear to provide the motivation for a significant number of anti-Muslim hate crimes.”

In his foreword, the rightwing journalist Peter Oborne writes: “The constant assault on Muslims from certain politicians, and above all in the mainstream media, has created an atmosphere where hate crimes, ranging from casual abuse to arson and even murder, are bound to occur and are even in a sense encouraged by mainstream society.”

The report is based on interviews with witnesses to and victims of hate crimes, as well as police officers and former members of extremist organisations such as the British National Party. It says: “An experienced BNP activist in London explains that he believes that most BNP supporters simply followed the lead set by their favourite tabloid commentators that they read every day. When these commentators singled out Muslims as threats to security and social cohesion, he says that it was perfectly natural for BNP supporters to adopt the same thinking.”

The report says the extreme right are directing their violence more against Muslims than black or Asian Britons. “Interviewees with long experience of extremist nationalist street violence in London are unequivocal in their assessment that Muslim Londoners are now a prime target for serious violence and intimidation in the way that Londoners from minority ethnic communities once were,” it says.

The study focuses on anti-Muslim violence in London, with its authors saying they will produce one covering the whole of the UK by this summer.

The report, Islamophobia and Anti-Muslim Hate-Crimes: a London Case Study, is available online from the European Muslim Research Centre website.

Update:  See Jonathan Githens-Mazer and Robert Lambert, “Muslims in the UK: beyond the hype”, Comment is Free, 28 January 2010