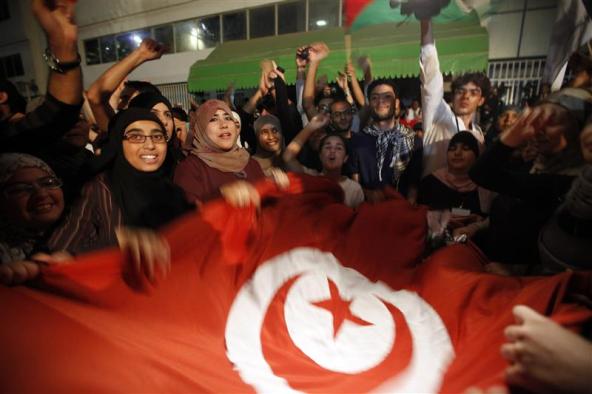 Noah Feldman analyses the success of Ennahda in the Tunisian elections:

Although secularists in Tunisia and Egypt didn’t want elections to come too quickly, they haven’t been heard arguing that elections are a mistake altogether. That is, the ideology of the Arab Spring actually is democracy. The proof is in the willingness of the leading revolutionaries to be beaten by social forces they don’t fully trust.

The Islamists, too, reflect the ideals of democracy. This phenomenon goes back 20 years to Algeria’s experiment in democracy, when Islamists realized for the first time that the public in an Arabic-speaking country would support them only if they declared that Islam and democracy were compatible. Since then, in a gradual process, more and more political Islamists have become democrats. Ennahdha’s Ghannouchi, exiled in Europe for decades, was a thought leader in the process of the Islamist embrace of equal citizenship and equal rights – which makes it especially fitting that his party is playing a primary role in Islamist electoral politics.

Combining pragmatism and principle, mainstream political Islam has undergone an extraordinary democratic transformation. And it has done so in the very years when radical jihadism threatened Islamic democrats with condemnation and murder. From the standpoint of the global ideal of democracy, this is a victory of historic proportions.