Muslims currently amount to only around 15% of Russia’s population, Pipes conceded, but he went on to warn:

… their proportion is fast-growing. Alcoholism-plagued ethnic Russians are said to have European birthrates and African death rates. Their women have on average 1.4 children, and their men have a life expectancy of 60 years. In Moscow, ethnic Christian women have 1.1 child. In contrast, Muslim women bear 2.3 children on average and have fewer abortions than their Russian counterparts. In Moscow, Tatar women have six children and Chechen and Ingush women have 10.

Responding to these claims in Forbes, Mark Adomanis – who unlike Pipes actually possesses some specialist knowledge of Russia and its demography – has raised serious doubts about Pipes’ figures. In fact Adomanis can’t even see where Pipes could have got them from. He writes:

Rosstat, the Russian statistical agency, doesn’t publish any ethnically-based fertility or mortality statistics. I’ve spent an awful lot of time over the past few years looking through Rosstat databases, and I don’t think I’ve ever seen data on the birth or death rates of a particular ethnic group. It would be great to know what the alcohol poisoning rate was for all ethnic Russians or what the birth rate was for all ethnic Tatars, but, unfortunately, those don’t seem to be available.

However, Rosstat does publish region-by-region fertility statistics and as part of the 2010 census also collected regional data on ethnicity. Analysing these official statistics, Adomanis found that in 2011 the most heavily Slavic parts of the country, areas with virtually no “national minorities”, had a fertility rate that was only about 3% lower than the all-Russian average. 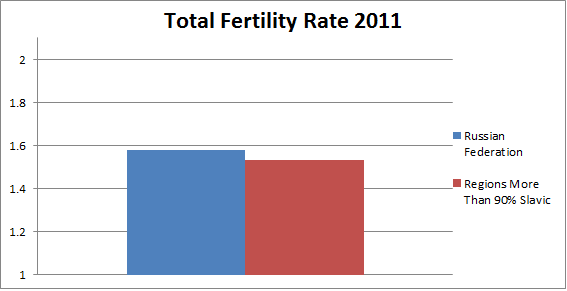 Furthermore, according to Adomanis’s analysis: “the weighted average TFR of traditionally Muslim areas (seven different regions inhabited by about 13.8 million people) is 1.94. It seems impossible to square Pipes’ contention that Chechen and Tatar women are averaging  6 and 10 children with the fact that even traditionally Muslim areas of Russia have below-replacement fertility.”

From this Adomanis concludes:

… it simply doesn’t seem to be true that Russians are being massively out-bred by more fecund minorities. The non-Russian share of the population will increase but it will do so in a slow and gradual manner, not the vaguely apocalyptic one traced by Pipes. In this sense Russia is not a bizarre outlier but an awful lot like most European countries where the share of the titular nationality is set to decline gradually over the course of the 21st century.

So it would appear that what Pipes has fed Washington Times readers is just another version of the familiar Islamophobic myth about Muslims outbreeding non-Muslim Europeans, in a “demographic jihad” that will supposedly lead to Western Europe succumbing to Islam. Using the same dodgy statistical methods, Pipes has simply transposed this paranoid myth to Russia.