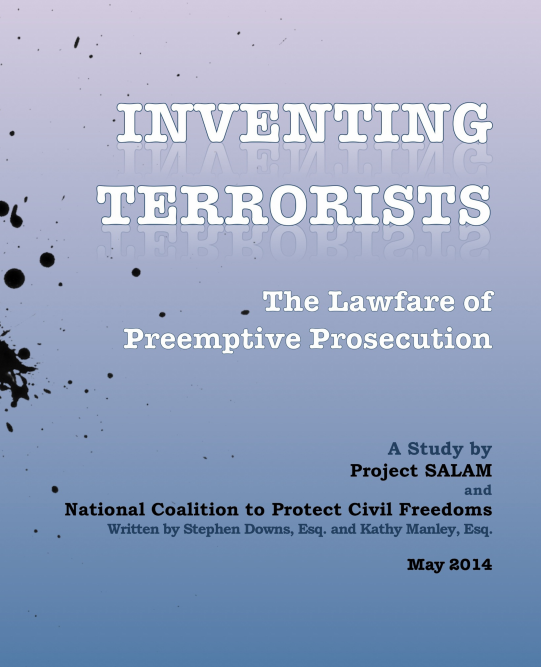 Nearly ninety-five percent of individuals on a Justice Department list of “terrorism and terrorism-related convictions” from 2001-2010 included some elements of preemptive prosecution, according to a study by attorneys which they say is the first to “directly examine and critique preemptive prosecution and its abuses.”

The study is called “Inventing Terrorists: The Lawfare of Preemptive Prosecution” [PDF]. It was released by Project SALAM, which stands for Support and Legal Advocacy for Muslims, and the National Coalition to Protect Civil Freedoms (NCPCF), a coalition of groups that “oppose profiling, preemptive prosecution and prisoner abuse.”

While Mother Jones has already published extensive work on the entrapment and prosecution of “terrorists” since the 9/11 attacks examining the Justice Department’s list, this study is noteworthy because it advances the journalism to outline how the government has perverted the criminal justice system through practices that have become popular especially against Muslims.

Stephen Downs and Kathy Manley, authors of the study, were defense attorneys for Yassin Aref, an imam of a mosque in Albany, New York, who was targeted for his “ideology.” The government deployed an agent provocateur, Shahed Hussain, to entrap the inman by accepting a “loan” that Hussain claimed consisted of funds from the sale of a missile to terrorists. So the authors produced the study with the experience of having defended someone who was a victim of this kind of prosecution.

The concept of preemptive prosecution is defined as “a law enforcement strategy, adopted after 9/11, to target and prosecute individuals or organizations whose beliefs, ideology, or religious affiliations raise security concerns for the government.” (However, the authors do acknowledge that the practices bear resemblance to tactics used by the FBI as part of COINTELPRO.)

Criminal charges are pretext. For example, someone charged with “material support for terrorism” may be charged with that to criminalize “free speech, free association, charity, peace-making and social hospitality.” Someone may be charged with “conspiracy” for having friendships or simply being part of an organization the government doesn’t like.

Agents provocateurs may be sent in to entrap a target into participating in a plot manufactured and controlled by the government every step of the way. The government may also choose to use “minor ‘technical’ crimes,” such as errors on immigration forms, an alleged false statement to a government official, gun possession, tax or financial issues, etc., to go after someone for their “ideology.”

The study also concluded that there were only eleven cases where threats had been “potentially significant” to the United States. “Only three were successful (the Tsarnaev brothers and Major Nidal Hasan), accounting for seventeen deaths and several hundred injuries.”

Out of hundreds of cases, the authors were only able to come up with twenty-three individuals who they believed ever posed a threat and were not preemptively prosecuted. But, as is noted in the study, nine of these people were inexplicably listed even though they committed non-terrorism related crimes.

Thus, the study clearly demonstrates how resources for fighting terrorism have mostly been used to target individuals who are suspicious and easier to prosecute because they practice a certain religion or have an “ideology” the general public will resent. And if most of these people were not people of color with Arabic-sounding names that could be used to promote a fear of foreigners in the criminal justice process, their crimes would be given the same light treatment other members of the general public typically receive.

Through preemptive prosecution the government can discourage Muslim Americans from supporting charities abroad, even when those charities have no nexus at all with groups committing violence. For example, Dr. Rafil Dhafir, an oncologist who was born in Iraq and later became a US citizen, founded the Help the Needy Charity in 1990 and for thirteen years fought to raise money for Iraqis most affected by the Gulf War and UN sanctions. He donated $1.4 million “of his own money,” according to the US government. He was particularly concerned about the effects of depleted uranium on Iraqis. But his charity was criminalized and he was arrested just weeks before the invasion of Iraq in 2003.

Preemptive prosecution may lead to a “terrorism enhancement” being applied during sentencing, which opens one up to being placed in a Communications Management Unit (CMU), as the government did to Aref. CMUs are solitary confinement units and involve a set of highly restrictive detention conditions that limit contact with family and the outside world.

There are also several prosecutions where the government criminalizes the advocacy of what the study calls “non-specific violence.” While it may seem controversial, this speech is protected under the Constitution.

“Free speech includes the right to use violent and hate speech, and it is not charged as a crime when right-wing terrorists or domestic hate groups engage in it. Charging only Muslims or other targeted groups is discriminatory and preemptive,” the study contends. (The case of Tarek Mehanna is one clear example.)

“Simply being a member of a group, or being associated with certain individuals, should not be a crime unless there is evidence of specific intent to become involved in a given criminal action or conspiracy,” the study argues. However, the study adds, “A number of material support and conspiracy cases included individuals who were friends of others who were charged, and this association was the main evidence against them, with little or no additional evidence.” (For example, the case of the Fort Dix Five.)

Additionally, the study takes the even more bold position of defending those who go to “foreign lands” to defend Muslim communities and prevent them from attack.

…All prosecutions of defendants who expressed a desire to go to a training camp, or who unsuccessfully tried to find one, or who attended one and failed to act on the training, are considered preemptive prosecutions unless the circumstances indicated that the defendant actually intended to engage in violence against civilians or the United States. Many defendants were drawn to attend training camps out of a desire to defend Muslim communities in Bosnia, Kashmir, Chechnya, Sudan, or other countries where there was/is conflict. However, cases in which the defendants actually intended to commit acts of violence against American soldiers or against civilians are not included as preemptive prosecutions…

While the study does not draw any conclusions, hypotheses are put forward on why there are so many more preemptive prosecutions of Muslims for terrorism or terrorism-related offenses.

The first hypothesis is that the FBI truly believed there was a domestic network of “ideological” Muslims to dismantle. Another hypothesis is that preemptive prosecutions are designed to scare Muslims from criticizing US foreign policy abroad. And yet another is that this is how the government must go about prosecuting these individuals because, if they did it any other way, they would be running up against constitutional prohibitions.

In other words, preemptive prosecutions represent the government’s best efforts to take advantage of all the loopholes in the criminal justice system and neutralize the ability of those prosecuted to put on a defense allowing the law to be used by prosecutors to control a population.