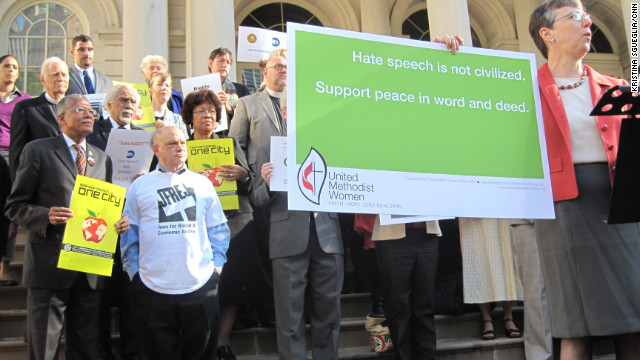 Jewish, Christian and Muslim religious leaders gathered in New York to protest advertisements that claim “Support Israel. Defeat Jihad” smattered across 10 city subways stations Monday and to debut a counter-ad that is due up in the same stations at the end of the week, according to the interfaith group.

“I am Muslim,” explained Adem Carroll of the Muslim progressive traditionalist alliance on the steps of New York City’s City Hall. “On a personal note, when I ride the subway and see messages smeared that demean me, I am scared.”

Carroll is speaking about an advertisement originally rejected by New York’s Metropolitan Transportation Authority that reads: “In any war between the civilized man and the savage, support the civilized man. Support Israel. Defeat Jihad.” The authority’s decision to reject the ad, which was produced by a Judeo-Christian law firm, was overturned last month when a federal judge ruled the ad is protected under the First Amendment.

A counter ad, funded by the United Methodist Women, reads “Hate speech is not civilized. Support peace in word and deed.” This ad will appear in the same 10 subway stations at the end of this week, according to the Harriet J. Olson, general secretary of the women’s group.

These posters are spread across Manhattan on almost all the lines, including popular commuter hub Grand Central Station, according to the Interfaith Center of New York.

The ad has stirred a conversation about the fine line between free speech and hate speech. “This ad tipped the balance,” the Rev. Chloe Breyer, executive director of the Interfaith Center of New York, said at the press conference Monday. Maureen Silverman of Jews Against Islamophobia said Monday, “Pam Geller hides behind free speech to perpetuate hatred. We think these ads are racist.”

“Never underestimate the power of hate speech” said Linda Sarsour of the Arab American Association of New York, who issued a Twitter campaign against Geller using the hashtag #mysubwayad, encouraging the public to submit new ideas for subway ads.

“We speak hundreds of languages in New York; hatred is not one of them,” Sarsour said at the gathering on City Hall steps.

The interfaith group is also calling on the MTA to use revenue from payments made to promote the American Freedom Defense Initiative’s ad to fund the placement of human rights posters. 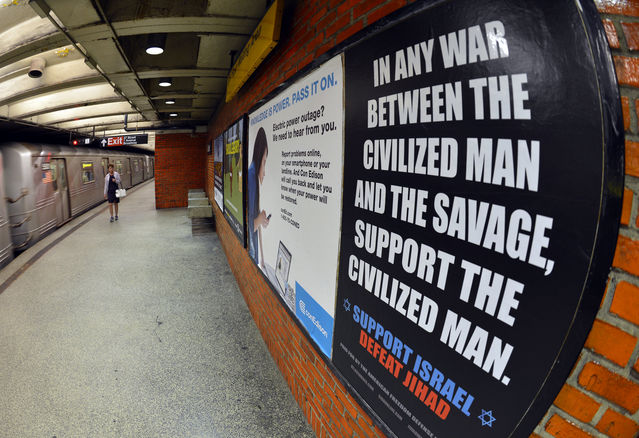 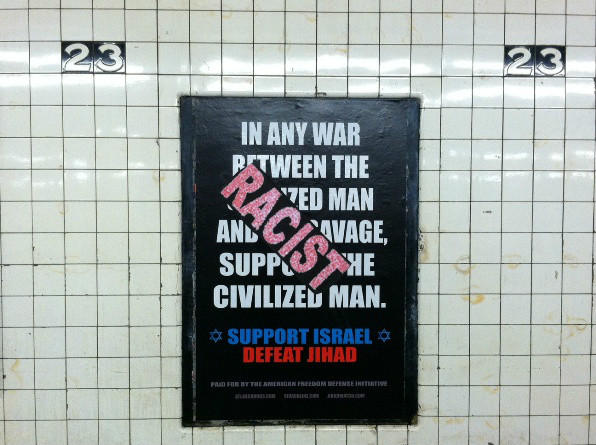