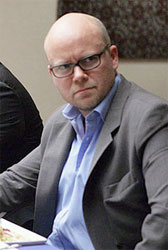 In an interview with the Sunday Telegraph immigration minister Damian Green is quoted as saying:

“I stand personally on the feeling that telling people what they can and can’t wear, if they’re just walking down the street, is a rather un-British thing to do. We’re a tolerant and mutually respectful society.

“There are times, clearly, when you’ve got to be able to identify yourself, and people have got to be able to see your face, but I think it’s very unlikely and it would be undesirable for the British Parliament to try and pass a law dictating what people wore.

“I think very few women in France actually wear the burka. They [the French parliament] are doing it for demonstration effects.”

Elsewhere in the Telegraph, under the headline “By refusing to ban the burka, Damian Green is supporting the humiliation of millions of British women”, Toby Young informs his readers that “the burka is both a symbol and a source of the oppression of Muslim women”.

According to Young: “Few people can be in any doubt that Islam is a deeply misogynistic religion.” As for wearing the veil, according to Young “for most Muslim women it is not a free choice but something they’re forced to do by their fathers or brothers or husbands – and the consequences of disobeying can be a beating or worse”.

To which we can only respond: Few people can be in any doubt that Toby Young is a deeply ignorant bigot.

Postscript:  Meanwhile, over at the Independent on Sunday Joan Smith also addresses the French veil ban. To be fair, Smith does come out grudgingly against the ban – but not because it represents a disgraceful attack on the right of women to dress as they choose. No, this feminist writer doesn’t see that as a problem at all. She thinks the French law is mistaken because it will produce “a parade of burqa-wearing martyrs” and “Islamists around the world will love every minute of it”.

As for the point that “Muslim women often say they have chosen to wear the niqab or burqa of their own free will”, Smith is prepared to concede that this is “true in some cases”. However, according to Smith, “the motivation for wearing it is almost wholly political”.

Amazing, isn’t it, how non-Muslims who have such little empathy with Islamic religious beliefs possess such an unerring insight into the motivation of Muslim women who wear the veil? Veil-wearing women themselves, of course, will offer different explanations for their decision to adopt the niqab. They will justify it in terms of a particular (minority) interpretation of the Islamic requirement for modest dress. Some will argue that it allows them to be judged on the basis of their character and intelligence rather than their looks.

But what would they know? They’re only Muslim women.