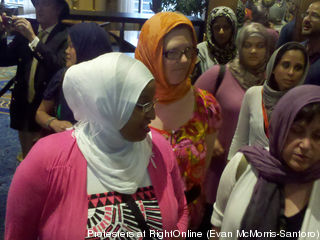 MINNEAPOLIS — A group of around ten women in Muslim headscarves crashed the RightOnline conference for about ten minutes Saturday, protesting what they said was an incident targeting Muslim women Thursday night.

The event was the latest spark kicked up by the proximity of Netroots Nation and RightOnline. The two conferences are blocks apart – RightOnline is being held in a hotel many Netrootsers are staying in – and interaction between the progressives at Netroots and the conservatives at RightOnline has been inevitable.

A spokesperson for the group of women told TPM they weren’t sure of the identity of the man responsible for the Thursday incident – when two hijab-wearing women were followed by a man with a cell phone camera who reportedly asked them why they were dressed the way they were “in America” – but rumors that the incident involved an employee of conservative blogger Andrew Breitbart were rampant at Netroots.

The women who arrived at RightOnline were Netroots attendees, and were accompanied by blogger Joe Aravosis and gay rights advocate/provocateur Dan Choi.

The spokesperson for the “flash mob,” Allison Nevitt, told TPM that there was a larger message to their protest beyond the Thursday incident, which Nevitt said had been reported to Minneapolis police. “The point was mostly that Muslim women are an equal part of this nation, and that we have an equal right to exist here,” Nevitt said.