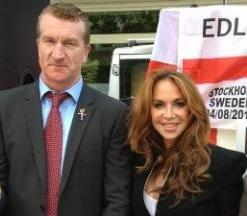 “Joining the co-founder of the EDL in prison, Kevin Carroll has been arrested for a Facebook comment. This is part of the war on freedom and its champions.

“Kevin Carroll and Tommy Robinson are on the SION President’s Council and are true fighters for freedom. They oppose the oppression, subjugation and racism of Islamic supremacism. But the savages have succeeded in imposing the sharia – hence their arrests.

“Apparently Kevin Carroll used the word I made famous in our AFDI ads, ‘savage’. And got arrested. The savages didn’t like it. The [sic] is blasphemy enforcement by dhimmi law enforcment. But their instructions came from on high. Shocking. If the Brits don’t fight back, it’s over for them.”

Carroll’s opinion of Muslims, as stated in his Facebook post, is that “They are all fukin backward savages”. In defending her own notorious “savage” ad, Geller piously denied that she was referring to “all Muslims” as savages. This, she assured Jamie Glazov of FrontPage Magazine, was “nowhere in my message”. However, Geller evidently has no problem with Kevin Carroll describing Muslims as “all fukin backward savages”.