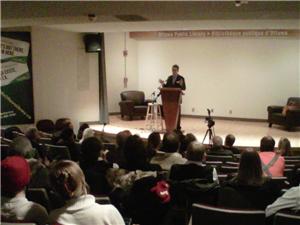 A controversial British lawyer spoke in Ottawa despite protest from groups who oppose his opinion, which is that mosques should not be built in non-Muslim areas.

Gavin Boby spoke in front of 40 people at the main branch of the Ottawa Public Library Monday evening as protesters stood outside the branch at the corner of Metcalfe Street and Laurier Avenue West.

Boby, who is also an activist, is known for using zoning regulations to try to stop mosques from opening in areas he considers “non-Muslim.”

He told the CBC’s Simon Gardner before the speech he does not want views of Islam to dictate certain neighbourhoods. “Increasingly what we are seeing now is self-declared Muslim areas where you get Muslim patrols saying you can’t walk a dog, wear a skirt,” he said.

A group that claimed it strives to “stop Muslims from taking over neighbourhoods” organized Boby’s speech. The Ottawa police hate crimes unit also monitored the talk.

Ihsaan Gardee, executive director with the Canadian Council on American-Islamic Relations, said the library should have cancelled the visit.

But the library said it only rented the auditorium out to the group and it forced the group organizing Boby’s speech to sign an agreement not to violate criminal or human rights laws. Police were consulted on the issue as well, and encouraged groups to book the room for a speech on an opposing viewpoint.

But some groups were unhappy with the decision to let Boby speak. “By affording someone like this who has this kind of message, a publicly-funded taxpayer venue, it adds and gives a credibility to their message, which I don’t think is something that should be considered lightly,” Gardee said.

Library board chairwoman Jan Harder said she received hundreds of emails demanding she shut the event down, but she echoed the library’s sentiment it can only be stopped if a law is broken. She said it was important to preserve freedom of speech.

Considering the publicity generated by reports of Boby’s visit, an attendance of 40 – some of whom had evidently come along to oppose Boby – was really quite pathetic. It shows how little resonance his message of hatred and bigotry against Muslims has among the people of Ottawa.

The position taken by the Ottawa Public Library management is of course a disgrace. If Boby’s hate-progaganda was directed against the Jewish rather than the Muslim communty, it is difficult to believe that the same shallow arguments about freedom of speech would be advanced in defence of his right to address a meeting at a publicly-funded institution. But in Canada, and indeed across the western world, Muslims are considered a legitimate target when it comes to inciting hatred.

The “indirect intimidation” in which CAIR engages, according to this comment piece, consists of making “exaggerated claims of persecution of Muslims”. Quite what this has to do with intimidation of any sort is unclear.

And in a letter to the Citizen, one of the organisers of the public meeting defended their invitation to the self-styled mosquebuster in the following terms:

“Boby is a reasonable person concerned about community safety; he acts not from prejudice but from knowledge of the intimidation and violence that the mosques regularly bring in their wake…. As Boby has discovered, such mosques are unlike churches or synagogues in that they traditionally and commonly do not operate solely as places of benign worship. Many are centres of jihadist activity in which the faithful are indoctrinated to support and commit violence against infidels.”

This letter was written in reply to an earlier comment piece in the Citizen by Fred Litwin and Salim Mansur, who argued that the strand of Islamophobia promoted by Boby and his co-thinkers failed to make a distinction between Islamists (who should of course be treated like Nazis) and ordinary Muslims. The authors expressed their opposition to those like the English Defence League “who have misguidedly turned to making all Muslims and Islam their enemies”.

However, the differences between the Islamophobia of the EDL and that of Mansur are really very limited. While he may disagree with the EDL over banning the construction of mosques, Mansur shares their view on banning Muslim migrants. Only last October he warned a parliamentary committee about the threat posed by the inward migration of ordinary, non-Islamist Muslims:

“The flow of immigration into Canada from around the world, and in particular the flow from Muslim countries, means a pouring in of numbers into a liberal society of people from cultures at best non-liberal…. We have the precedent of how we selectively closed immigration from the Soviet bloc countries during the Cold War years, and we need to consider doing the same in terms of immigration from Muslim countries for a period of time given how disruptive is the cultural baggage of illiberal values that is brought in as a result.”