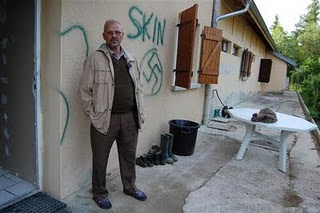 Le Progrès reports that the walls of the El-Hijra mosque in Champagnole were covered with swastikas and slogans such as “Death to Arabs” and “France for the French” on Saturday night. In thirty of existence the mosque had never had to face this kind of aggression or experienced any particular problems in connection with its activities. The association that manages the mosque and the mayor have both filed complaints.