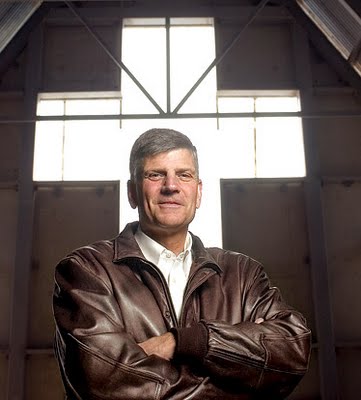 Yes, there’s a new Obama-Muslim conspiracy theory on the right: The evangelical son of one of America’s most famous evangelists says that President Barack Obama has allowed the Muslim Brotherhood to become part of the US government and influence administration decisions.

In an interview last week with Newsmax.com, a conservative website (that pushes the Obama-was-born-in-Kenya conspiracy theory), Franklin Graham, an evangelist like his father, Billy Graham, claimed that the fundamentalist Islamic political group has burrowed into the Obama administration and is shaping US foreign policy. Sounding a bit like Glenn Beck, Graham explained:

The Muslim Brotherhood is very strong and active in our country. It’s infiltrated every level of our government. Right now we have many of these people that are advising the US military and State Department on how to respond in the Middle East, and it’s like asking a fox, like a farmer asking a fox, “How do I protect my henhouse from foxes?” We’ve brought in Muslims to tell us how to make policy toward Muslim countries. And many of these people we’ve brought in, I’m afraid, are under the Muslim Brotherhood.

Infiltrated every level of our government – that’s quite a claim. Yet Graham did not name a single Muslim Brotherhood infiltrator or cite a specific Obama administration decision that has been manipulated by these crafty behind-the-scenes Islamists.