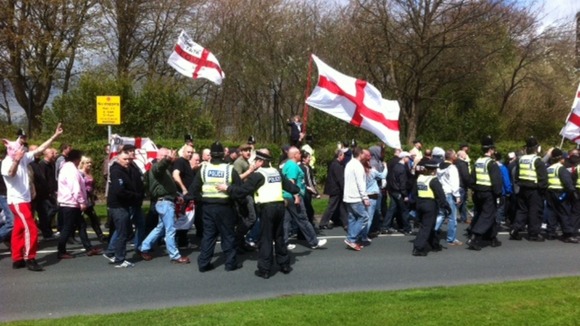 Four arrests were made at a Far Right demonstration in Leeds.

A huge police operation involving over 100 officers swung into action on Saturday (May 4) as the English Defence league marched through Leeds’ Lingfield estate – at the invitation of residents angered after the go ahead was given to plans to turn a derelict pub into a Muslim-run community centre.

A counter demonstration by Unite Against Fascism, which attracted around 120 people, was kept apart from the EDL by dozens more officers.

Marchers were tightly contained by officers, more than dozen riot vans, two police horses and police dogs, after setting off from the nearby pub The Penny Fun, where they had been bussed in from the train station, after arriving from cities including Coventry and Newcastle.

Julian Marshall, a member of Lingfield Residents’ Association, said: “There were so many objections against it, not because it is a race issue, but there’s less than three per cent Muslim population on the estate. I wish it hadn’t come to this. It seems we have been completely and utterly betrayed by the council.”

But teacher Dave Goodfield, who took part in the counter protest, said: “We are trying to show this is a peaceful society and mixed neighbourhood and nobody resents the idea of a Muslim community centre in this area.”

Police said the protest had passed off largely peacefully. Supt Martin Snowden said the arrests were made for offences including being drunk and disorderly and minor public order.

You’ll note that the Yorkshire Post uncritically repeats the EDL’s own claim that it was demonstrating “at the invitation of residents”. Last week the same paper reported that at a council planning meeting in February the notorious so-called “mosquebuster” Gavin Boby spoke against UKIM’s proposals “on behalf of the Lingfield community”. 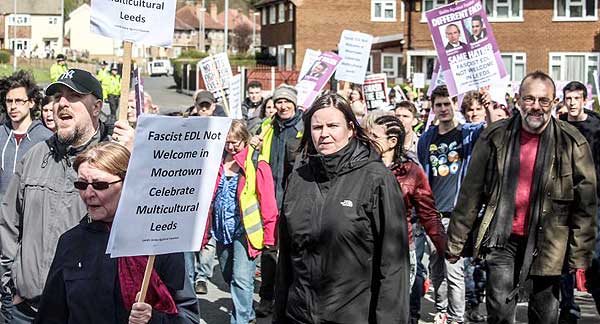