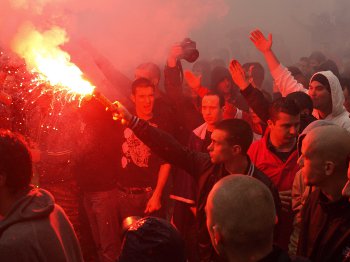 AFP reports that nearly 500 far-right activists gathered in Lyon today to protest against halal meat and the “Islamisation of France”.

The Bloc Identitaire had originally intended to hold a “March of the Pigs” through the city but after that had been banned they had to settle for a static “rally for freedom” instead. Bloc Identitaire president Fabrice Robert told the protestors that “Islamisation is a reality in France” while the crowd chanted “Islam out of Europe”, threw smoke bombs and vandalised a kebab restaurant.

They were outnumbered by left-wing counter-demonstrators, variously estimated at between 800 and 2,500, who raised the slogan “Fascism is gangrene” and called for economic and social equality.

The English Defence League proudly announced that its representatives would be joining the “Marche des cochons”, in order to “support our French brothers in the defence of French culture”, evidently unaware that the march had been called off.

There were reportedly five EDL members at the demo. They told Lyon Info that they were there to defend democracy, freedom of expression and the French way of life, “without really knowing what it is”. They did know the British way of life, though, an EDL representative pointed out. And anyway “we’re all Christians”.

It appears that the British far right share another central feature of their culture with their French counterparts. Lyon Info reports that only 2-300 Bloc Identitaire activists actually made it to the rally. The rest were to be found in the neighbourhood bars.

Update:  The EDL states that two of its representatives have been arrested in Lyon, including EDL leader Stephen Yaxley-Lennon.

One more update:  The EDL admins have now removed the thread on Lennon’s arrest from their Facebook page. That decision might not be unconnected with the posting of comments like this:

The entire thread has however been screengrabbed by Exposing racism and intolerance online. See here, here, here and here.